Astrophysicist Edward Stone spoke about the history of the Voyager project and the recent breakthrough of the Voyager 1 spacecraft into interstellar space.

Stone directed the NASA Jet Propulsion Laboratory after leading various spacecraft missions for NASA and working as a project scientist on the Voyager 1, an unmanned spacecraft that is now in interstellar space. 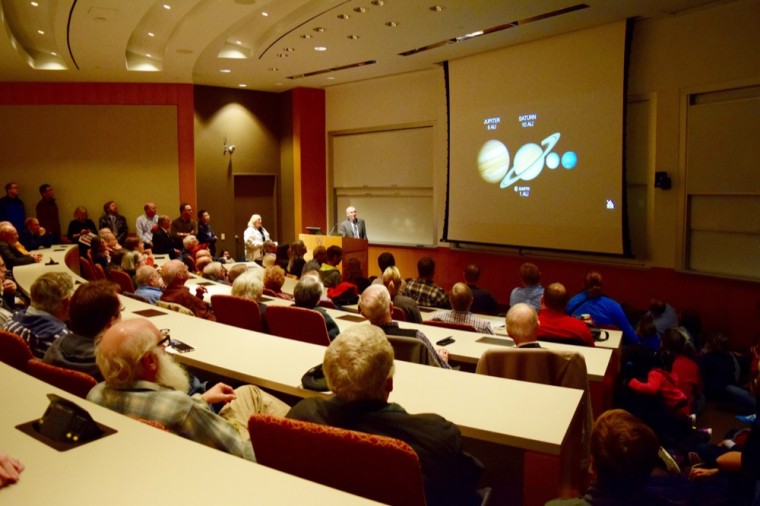 The event, which happened Thursday night in Brauer Hall, brought in an audience of more than 100 people, mostly St. Louis community members.

The Voyager program was launched in 1977 under Stone’s leadership with the intentions of exploring Jupiter, Saturn, Uranus and Neptune. On Aug. 25, 2015, the Voyager 1 spacecraft became the first piece of man-made equipment to leave the solar system and enter interstellar space.

Physics professor Martin Israel was Stone’s student while Stone was a graduate student teaching assistant at the University of Chicago. Israel said that although reaching and analyzing the vast space between solar systems for the first time might not have a direct impact on Earth, the knowledge was intellectually valuable.

“We’ve been observing the outside astronomically lots of different ways from a distance, and now we have something there, and so it’s exciting to know what’s out there firsthand,” Israel said.

Stone says that he constantly learned new and surprising things about the solar system through the Voyager missions, such as the presence of active volcanoes on Jupiter’s moon Io, which were the first volcanoes discovered outside of Earth.

“Our terracentric view of planets in the solar systems suddenly got a real jolt, and we realized that our solar system is much more impressive than we’d thought,” Stone said.

Each of the Voyager spacecrafts contains a copper phonograph record, collectively called the Golden Records, that contains representations of life on earth, such as diverse musical selections and voice recordings of greetings in 55 languages, a map of how to find Earth in the universe and other information that NASA scientists decided would be relevant should an extraterrestrial civilization come across the spacecrafts.

“I think [the Golden Record] is more for us on earth, because it meant people here had to think about what should you capture to really define humanity,” Israel said.

Rashied Amini, a graduate student and teaching assistant, is also a systems engineer at the NASA Jet Propulsion Laboratory, where he collaboratively designs space missions. After Amini attended Stone’s lecture, he said that space exploration is a metaphor for human curiosity.

“I think it’s a fundamental part of human nature that we don’t know much about our universe but we are always striving to now, and as soon as we stop, I feel that we stop being human in some sense…Human curiosity and the quest for human knowledge is such an immutable part of the human experience,” Amini said.

Space exploration and science in general is about the constant search for challenges as a means of seeking knowledge and innovation, Stone said. He advises students who want to follow in his footsteps to seek out challenges and to confront the unknown.

“One of the things that the Voyager is certainly doing is looking for the frontier…If you want to optimize the chance for significant discoveries, you really should be looking, ‘Where is the frontier? Where are these frontiers that perhaps you can contribute to?’ That’s what science is about: understanding nature in a new way by observing it in a different way,” Stone said.

“As a scientist, it’s wonderful to find things you didn’t expect, because that’s where there’s the most to be learned, and Voyager did that day after day,” he added.