“Tough Expectations: The Weight Society Places on Men’s Bodies” was part of the annual Love Your Body week. The Representation Project and Reflections co-organized the panel in College Hall. 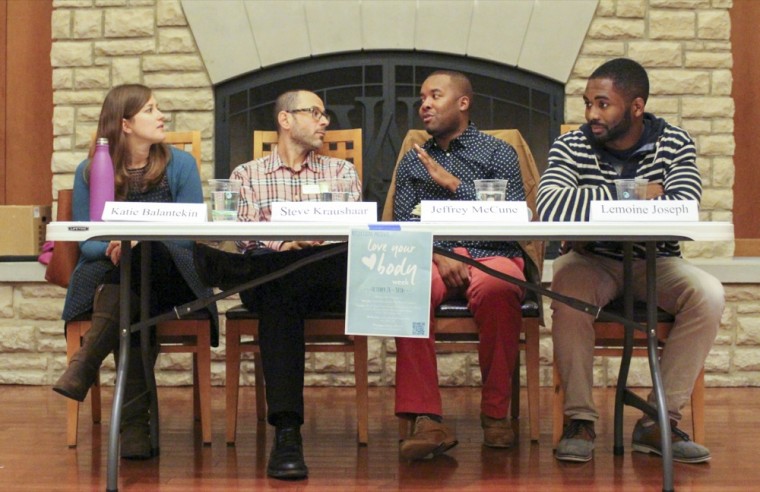 A panel of students and health professionals discuss male body ideals as part of Love your Body Week. This event, hosted by Reflections and the Representation Project, encourages people to have positive body images.

While the impacts of societal pressures on female body image have become a relatively common topic of controversy and conversation, according to the panelists, there is a gap in the dialogue when it comes to male pressures to look the socially prescribed way. This invisibility surrounding male body insecurities is extremely misleading, they said, as 43 percent of American men are dissatisfied with their bodies, according to the National Eating Disorders Association.

Panelist Steve Kraushaar, a staff psychologist and eating disorder specialist at Student Health Services, believes that this discrepancy parallels the gendered discussion of eating disorders in the United States.

“Eating disorders are often viewed as a women’s issue, so men are reluctant to acknowledge it,” Kraushaar said.

From a young age, boys are socialized to strive for extreme masculinity through interactions with images presented by muscular action figures, famous athletes and movie characters, panelist and senior Lemoine Joseph said.

“[There’s] the idea of Barbie and Ken, and women always look to Barbie as the model and men look to Ken…Ken never really looked like me. There’s that intersection of not only gender but also race,” Joseph said.

Jeffrey McCune, panellist and associate professor of Women, Gender, and Sexuality Studies, believes that this concept of built white men as the ideal of masculinity can lead to violence and gender inequality.

“I think that on one level there’s the kind of big buffed masculinity as an ideal, but…what does it mean that we are living in a century where men are being taught to build bodies that dominate? So if our bodies are bodies to dominate, what does that look like and how does that relate to the situation? How do we relate to the dangers of constructing masculinity?” McCune said.

These “dangers of constructing masculinity” can lead to severe eating disorders and, in some cases, male muscle dysmorphia, according to McCune.

“My take on muscle dysmorphia is that one wants to see results—muscular results—and will do anything almost obsessively to see that. If they don’t achieve the muscles they want, or even if they do, they still keep working for something greater,” McCune said.

The fact that men’s body issues are so rarely discussed becomes dangerous when the perception of eating disorders as female issues deters men from seeking treatment and help.

Kraushaar said he can count the number of men he has treated for eating disorders in his eight years at SHS on less than two hands, and these cases are typically among the most severe he sees. He cites the dismissive atmosphere surrounding men’s eating disorders and body insecurities as the reason men do not seek treatment for less severe levels of disorders.

Freshman John Howard, one of the few men to attend the panel, came because he felt a strong connection to the cause and wanted to learn more about men’s body image issues.

“They [body image issues] often get overlooked on the male side, because society preaches that men need to be strong, confident and mentally and physically infallible,” Howard said.

Junior Nora Shevick, a member of Reflections, thinks that these problems are extremely prevalent on college campuses, perhaps more prevalent than elsewhere.

“I think campuses themselves are a place where there’s a lot of pressure, just because I think so many people at this age, and it’s all together, and I think it’s the culture of college in general,” Shevick said.

Shevick said that steps must be taken to change unrealistic body expectations and promote body confidence and acceptance in order to relieve this pressure.