Growing Greek life involvement nationwide and on campus has forced the Women’s Panhellenic Association to move to an off-campus location for the start of rush. 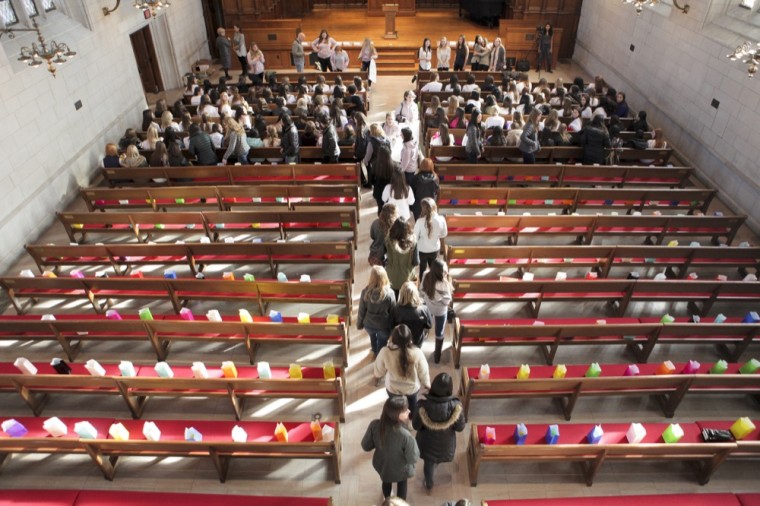 Potential new members for sororities walk into Graham Chapel for the last part of the recruitment process: Unity Day. This upcoming recruitment season will feature venue changes to accomodate a growing number of interested women.

The typical recruitment schedule consists of four “rounds,” each round lasting one day. In previous years, each round has been held on campus. This year, however, the first and largest open-house round, also known as “arete,” will be moved to America’s Center Convention Complex in downtown St. Louis. Students will be bused both there and back.

The shift was designed to make room for the growing population of sorority women. Next year, a ninth chapter will be added—Gamma Phi Beta, a historically active chapter on campus that closed due to low enrollment in 1993. With over 400 women showing up to recruitment in 2015, chapters were becoming too large. The average chapter size has increased 24 percent since 2013, prompting an extension committee to vote last spring to bring Gamma Phi back to campus.

Coordinator of Student Involvement and Leadership David Stetter said there will not be enough room on campus to support the large size of early recruitment rounds by 2017, and the first round was moved off campus this spring as a test run.

“This is kind of our time to learn from it and get the kinks out, so that in 2017 when we really have to be doing it, we know exactly what we’re doing. This is a learning year for us as well, and it just logically made more sense,” Stetter said.

He added that the main goal of the move was to enhance the “Potential New Member” (PNM) experience. In the past, the open-house round included 13 time slots, meaning actives had to present to 13 separate groups, but PNMs only visited chapters during eight of those slots.

“The PNM experience was sitting around doing nothing a lot, so we were very conscious around that,” Stetter said.

In making the decision, the Women’s Panhellenic Association spoke with other schools in Boston and Texas who had done the same thing. Overall, Stetter said, it made the PNM experience easier.

The 2016 schedule will have 10 rounds. PNMs will visit the eight existing sororities and hear a presentation about Gamma Phi Beta, leaving them with one idle round.

“So they’re only going to have a break where they’re doing absolutely nothing once, and so their whole day will be filled and it will go by a lot faster for them, with not as much downtime,” Stetter said.

Although Gamma Phi Beta will withdraw from formal recruitment immediately following the first round, they will be tabling, hosting information sessions and having events in the hopes of forming their first pledge class starting Jan. 19. The class will be comprised of women from each year and has a maximum of about 170, which is the approximate average chapter size at Washington University.

“They’re going to want women from all four years, because they’re basically building a chapter from the ground up,” Stetter said.

Recruitment leaders from current chapters have high hopes for the shift from the side of the parties.

“I think initially it will take some getting used to,” Cassie Wang, senior and Delta Gamma recruitment chair said. “The DG recruitment team is really excited about it, and I think once everybody goes through actual recruitment and arete day they’ll really really enjoy it.”

She also noted it will ease some of the stress and exhaustion the day is known to bring.

“Because it’s a bigger venue, we have less parties per day, which means we’re not actually recruiting all day long, just eight hours versus 13, so people will get a lot more sleep. It will be a better environment,” Wang said.

“It’s definitely going to be a transition, just because we’ve done the same thing so many years in a row, but I think that everyone’s open to the change and excited for it,” Packer said. “I mean, we won’t really know until it and we see how smoothly it goes. Hopefully we won’t have any snow.”

Sophomore Carson Platnick, also a member of Kappa Kappa Gamma, noted how difficult the first round was for her as a PNM.

“[The parties] are very spread out. Last year during recruitment it was really cold and so you had to walk a long distance in the cold before each party, which just made it a lot harder to keep things on schedule. It was a lot more of a hassle,” Platnick said.

She, however, expressed concern with the cost of transporting so many people along with all of the props used by each chapter.

“I’m not sure if it’s going to be worth how expensive it is to rent, and to pay for all the buses for hundreds of people…but regardless, I’m looking forward to it,” Platnick said.