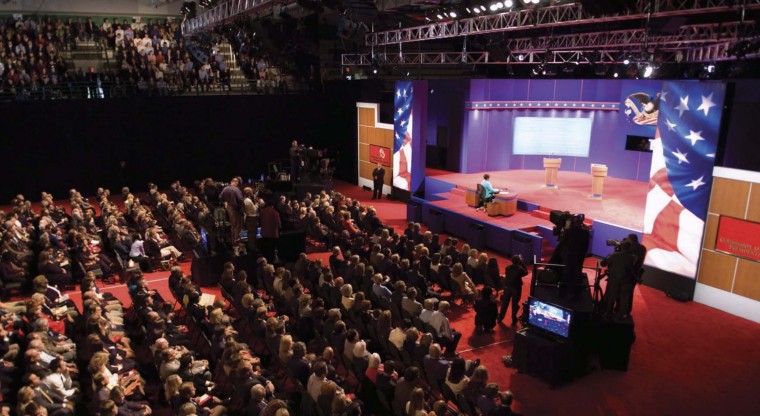 The debate will be held in the main gymnasium of the Athletic Complex, which is currently undergoing renovations planned to conclude August 2016. As in previous years, all tickets that the CPD provides to Washington University will be available only to full-time students, graduate or undergraduate, Steve Givens, associate vice chancellor and chair of the presidential debate steering committee, said. Although the University will not know how many tickets are available until as little as a day before the debate, they will be distributed via a lottery. For the 2008 vice-presidential debate, 432 tickets were distributed, although previous debates have had around 150 to 200 tickets.

One of the requirements for all institutions hosting a debate is paying a fee of $1.95 million to the CPD. Givens said that the University currently plans to pay this fee out of its operating budget, although it could potentially use corporate sponsorships for the debates, which it has done previously. The operating budget draws from sources such as tuition, grants and money drawn from the University’s endowment.

This is the fifth time the CPD has chosen the University, making it the institution that has hosted the most presidential debates, although the planned 1996 debate was cancelled.

Chancellor Mark Wrighton noted that the entire experience is rewarding for the entire community.

“It’s an energizing experience for the whole campus indeed, for the St. Louis community and the nation, and eyes of the world are on us and there’s a tremendous interest in what takes place,” Wrighton said.

The debate will be the second of three presidential debates held leading up to the general election. In 2000 and 2004, Washington University hosted a town hall-style debate, in which the moderator asked questions submitted by undecided local voters. The format of each of the 2016 debates has not been announced.

The University continues to apply to host debates because of positive student response to the atmosphere debates create on campus, Givens said.

“We do it because we heard, over and over, from our students and our alums who have been here when we have a debate how memorable, how educational, how life-changing it is for some of them to be here,” Givens said. “At the end of the day, not that many students even get in—hundreds of people, but not thousands, there’s just not that kind of space. So it’s not even just about who gets in, it’s about the excitement on campus, the opportunities for engagement, for volunteering…all that kind of stuff is very powerful. You feel like you’re in the midst of history here.”

Givens said planning efforts will begin in earnest in January, when the steering committee will be assembled.

Senior and Student Union president Jordan Finkelstein will sit on the steering committee through the end of his term in the spring. Although he will not be present for the fall debate, he said SU plans to set aside funding in the general budget for debate-related programming and hopes that the debate will help engage students in the election.

Vice Chancellor for Students Lori White said she was impressed by the level of engagement she witnessed when meeting with students earlier this year and was excited to promote conversations between students about the debate.

“I envision that we’d have lots of conversations in the residence halls and in the Residential Colleges and courses,” White said.

I’m hoping that surrounding the debates on campus that we have those kinds of gatherings everywhere—in our classroom spaces, in our residence halls, people off campus in their apartments, [I hope] that they’re watching the debate, that they’re engaged in the issues, that they’re talking with one another about who they’re going to vote for and why,” she added.

Other schools selected to host debates are Wright State University in Ohio and University of Nevada, Las Vegas.