Fed by the desire to curate an alternate history of University life, WUpeopleshistory.com (or, A People’s History of Washington University) is a collaborative effort that hosts historical accounts of social movements, advice for marginalized peoples and reports of secret societies and alleged administrative negotiation tactics.

Site contributors said that their goal was to preserve elements of the University’s history that the administration does not address. 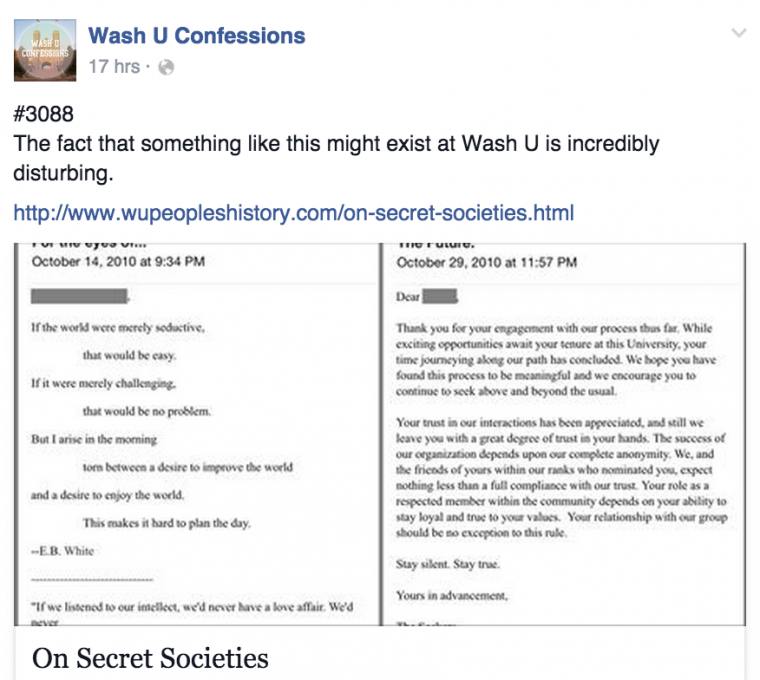 One of the site’s web pages, “On Secret Societies,” contains accounts from two anonymous sources about the alleged existence of Seven, a secret society whose members are purportedly placed in leadership positions and backed financially by the University.

While some contributors participated in an open peer-editing process, others—namely, the authors of “On Secret Societies”—did not disclose their identity to fellow creators of the project, which allowed for both anonymous publication and submission.

Although the tendency toward anonymity may be a point of contention for those concerned about the veracity of certain claims—like those about the existence of secret societies—contributors insist anonymity was necessary for the majority of the content.

In addition to allowing writers to share personal anecdotes and express concerns without fear of rebuttal from the University, anonymity provides a feeling of universal relevance, according to contributor and senior Cameron Kinker.

This power was especially applicable, Kinker said, to the pieces about identity on campus. “Being Muslim at WUSTL” by 2014 alumna Ayah Abo-Basha and “Dating While Black” by sophomore Mimi Borders were two of the only pieces with names attached.

Stephanie Aria, a senior and writer who declined to attach her name to a particular piece, emphasized the timing of this project—termed a “disorientation guide”—as key to the class of 2019.

“I was a pre-orientation leader this year, and they just put on a show for the freshmen,” Aria said about the First Year Center. “They’re really hard on the leaders…to show this perfect view that we’ve been cultivating since tours when the prospective students came and saw our school for the first time.”

In reality, Aria said, the fantasy dissolves within a few weeks of arrival at the institution. A People’s History of Washington University works to combat that—to serve as “a catalyst and a push to be like, ‘Wow, this isn’t the place that was advertised to me’ from the very beginning.”

According to University Archives Assistant Miranda Rectenwald, this isn’t the first time an alternative history has cropped up on the Danforth campus.

“From 1973 to 2002 there was a center on campus called the Women’s Resource Center, which was student-run. They published several booklets called HerStory…which were focused on campus history from female gender point of view,” Rectenwald said. “In the late 1960s, students published their own unofficial student guide…which included information such as where students go to obtain abortion services, which were at the time illegal in Missouri but not in Illinois.”

The disorientation guide references a document about administrative policies for “ensuring a passive student body,” allegedly written by the University in the spring of 2005. The “early removal of occupiers using police” is listed as the most viable option for “past and future disruptions caused by internal occupation of facilities,” according to the document.

Karisa Tavassoli, a senior who worked on the guide’s histories of student activism and WU Students in Solidarity, an activist group aimed at combatting racial profiling and police brutality, said that the University thanks students for certain forms of activism but stifles others.

“Some actions that are more calm will be deemed OK and noble, but then other actions that are disruptive are deemed as too rowdy, too radical, “Don’t do that,” when in fact it’s all for the same thing,” Tavassoli said.