This year’s production of “The Vagina Monologues” raised awareness about feminist issues and funds for the local YWCA during its three performances last weekend. 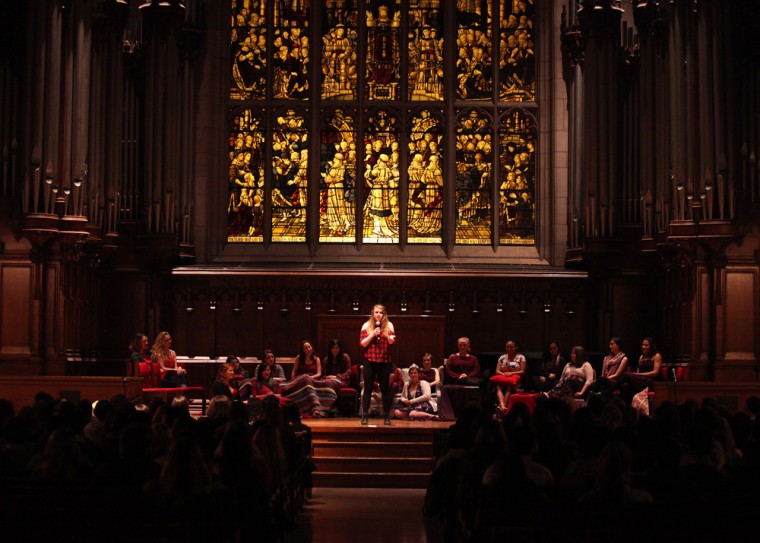 Student performers sit on stage at Graham Chapel for “The Vagina Monologues.” The event, which addressed issues relating to female sexuality from a variety of perspectives, raised money for the St. Louis YWCA and drew about 1,000 attendees across its three-night run over the weekend.

The monologues, chosen by playwright Eve Ensler from several she has written since the play’s debut in 1996, discussed women’s experiences and relationships with their vaginas, with actors delivering their monologues in the guise of women young and old, straight and queer, cisgender and transgender.

The production was organized by V-Day Wash U, a group created to oppose violence against women. The proceeds for productions of “The Vagina Monologues” are required to be donated, and V-Day Wash U donated its proceeds to the St. Louis YWCA, which supports survivors of sexual assault, although director and senior Sam Ligeti could not say at press time how much money would be donated.

Among the monologues performed this year were “My Vagina Was a Village,” which graphically depicted the story of a Bosnian woman who was raped during a war, and “The Flood,” in which an elderly woman discussed how she had become uncomfortable with discussing “down there.”

Senior Rachel Hirsch delivers her monologue, “Hair,” as part of “The Vagina Monologues” over the weekend. Female students from all grade levels recited monologues, injecting individual quirks into each performance and frequently drawing laughter and applause from the audience.

“It’s a cellar down there,” actor and senior Olivia Wolkoff said, performing “The Flood.” “It’s very damp and clammy. You don’t want to go down there, trust me. You’ll get sick!”

Audiences seemed to enjoy the performance, giving it a standing ovation at the show’s end. Students in the audience praised the show’s purpose and messages.

Sophomore Christian Ralph said that he felt the show helped draw attention to important topics that he might not otherwise fully understand.

“Shows like this are important not just for girls to see but for guys as well, ’cause I obviously as a guy can’t really understand what women are going through, and I think shows like this really shed a light on their perspective, a completely different perspective than what I as a guy have been through,” Ralph said.

Junior Alex Mitchell said that she liked the monologue “Because He Liked to Look At It,” in which a woman discussed how an intimate sexual encounter with a man ended her hatred of her own vagina.

“That was a great standup piece,” Mitchell said.

Ligeti said that creating a sense of community among the cast was important to her, leading to her decision to have all members of the cast sitting on stage while each actor or group of actors delivered her monologue.

“That’s a huge part of the show…it was incredibly empowering to be part of a community of all women,” Ligeti said.

However, Ligeti emphasized that the show was intended to be open to people of all genders.

“The show benefits everyone coming. A lot of the audience, I feel like, is the kind of audience that’s already educated about these issues, and it would be nicer to have an even wider variety of the student population attend,” Ligeti said. “Guys and girls can come to the show.”

Sophomore Megan Magray was the public relations coordinator for “The Vagina Monologues” and is the graphics editor for Student Life. She was not involved in the writing or editing of this story.