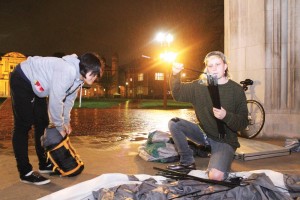 Protestors disassemble their tents Thursday under Brookings Archway. Despite ending the sit-in, they hope to continue urging the University to cut ties with Peabody.

At 10 p.m. Thursday night, the Students Against Peabody group officially ended its sit-in. But students involved say their stand against Peabody Energy will continue at the board of trustees meeting on May 1.

After 16 days of holding their ground underneath Brookings Archway, the students have decided to move on to other tactics to urge Washington University to cut ties with Peabody Energy.

At the official end time, several sit-in participants gathered to help pack up tents and close down their operations, but there was no public announcement due to the rainy weather.

Junior Julia Ho, one of the organizers of the sit-in, said that the group chose to end that version of protest because administrators had made it clear that they would not give in to the students’ demands.

“As much as the sit-in has been helpful for bringing people together and bringing awareness around the issue and really gaining national reports, it’s not an effective tactic anymore in pushing the administration to do more, so we’re just going directly to [Peabody CEO] Greg Boyce via the board of trustees meeting,” Ho said.

Junior Caitlin Lee, one of the Students Against Peabody organizers, felt the same, stating that the University’s relationship with Peabody was unacceptable.

“Over the past 17 days, Students Against Peabody has pressured Chancellor [Mark] Wrighton and Provost [Holden] Thorp to end Wash. U.’s relationship with Peabody Energy,” Lee said in a statement from the group. “It has become abundantly clear that the close relationship between Greg Boyce and the Washington University administration is impeding progress on this campus. As long as Greg Boyce sits on our board of trustees, the school will never re-name the Consortium for Clean Coal Utilization, take a stance on Peabody’s continuous record of social injustices, or meet any of our other demands.”

However, some students felt that continuing with the sit-in might have helped convince the University to meet the students’ demands.

“The sit-in was a success in that it raised awareness about Peabody and its despicable actions. On the other hand, the University also benefited from the fact that alumni and prospective students left with positive impressions of the University and its student body on ThurtenE weekend,” junior Raja Krishna said. “I wish negotiations didn’t break down because there was potential for much more progress.”

Following the abrupt end to their sit-in, members of the group hung two large banners from Brookings Hall and the Women’s Building early Friday morning, which read “May 1st Greg Boyce You Shall Not Pass” and “People Power not Peabody Power,” respectively. The banners were promptly removed, but their message was clear: Students Against Peabody have “uninvited” Greg Boyce from the board of trustees meeting.

“Tonight we’re just packing up, but definitely there will be lots of things happening in the next week as we’re getting ready for that board of trustees meeting. It’s definitely not over yet,” Ho said Thursday night.