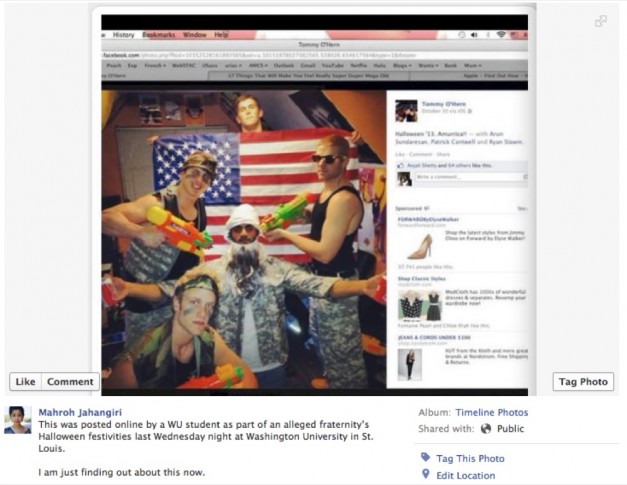 Senior Mahroh Jahangiri repost of a photo of five students’ Halloween costumes along with a seven-paragraph-long caption went viral Wednesday, garnering more than 760 likes and 140 comments as of 2:45 Thursday morning.

[UPDATE: Friday, 12:01 a.m.] A Solidarity Forum hosted by the Muslim Students Association Thursday offered Washington University’s administration a chance to apologize for its failure to respond immediately to a controversial Halloween photograph gone viral and students to suggest possible avenues for improvement.

The discussion in Tisch Commons, in which a number of MSA members related how the photo was an emotional trigger for them, bringing back memories of personal experiences with racism, came one day after a Facebook post featuring an image of students in Halloween costumes garnered hundreds of hits from community members and others who found the photo offensive.

Some criticized the administration for its delayed reaction to the photo, which was sent to Vice Chancellor Sharon Stahl just after Halloween. At the meeting, Stahl took responsibility for her lack of action.

“I am the person, the only person, to whom this posting was sent on Halloween; I made a grave mistake in not responding sooner than I did. I deeply regret that,” Stahl said. “If I could go back and undo this, I would, but I can’t, so I have to accept the responsibility of my mistake. I apologize, and I hope that moving forward you will be able to find it in your hearts to give me that grace.”

MSA President and senior Ishaq Winters and Jenni Harpring, program manager for the Gephardt Institute for Public Service, facilitated the discussion amongst other MSA members, administrators and other students in attendance.

“As a community, one of our highest priorities is to maintain an inclusive environment where everyone feels welcome,” they wrote. “Images like the one that was posted on a social media site by students on Halloween and the impact it has had reminds us that we all must be united in this effort and it must be on-going. Whatever the intention, the image has offended and hurt members of our community. The image also is entirely inconsistent with who we are as an institution, our values and the way in which we engage in the world around us.”

“We are deeply disappointed and saddened that this has occurred. We must expect better of ourselves and of each other,” they added.

Check back on Monday for more in-depth coverage.

[ORIGINAL STORY] Washington University administrators scheduled an emergency meeting for 8 a.m. Thursday morning to discuss a Facebook post that has led some to vocalize concerns about anti-Muslim sentiment on the Danforth Campus.

While at least one student said the University was alerted to the photo—featuring three students posing in black tank tops and camouflage pants, pointing toy guns at a student on the ground donning a beanie and gray beard while another holds an American flag in the background—at least a week ago, there was no formal response as of Wednesday night, after it had already gone viral on social media.

As of 2:45 a.m. Thursday, a screenshot of the original photo, interpreted by some commenters as “a clear representation of Osama Bin Laden” and others as “representative of a Muslim stereotype,” had drawn 761 likes and 144 comments and had been shared 157 times on Facebook.

Senior Mahroh Jahangiri posted the screenshot with the original caption of “Halloween ‘13. Amurrica!!”—along with a seven-paragraph caption in which she interpreted the photo as “represent[ing] a broader, more aggressive (and apparently violent) Islamophobia rampant here at WashU and in the United States.”

She told stories of discrimination she has faced while at the University, expressed her disappointment in the student body for its lack of a reaction, explained why she was offended by the photo and urged students to “RAISE HELL ABOUT THIS.”

“I find it hard to believe that if this was a black man or a gay man or a Latino man with guns aimed at his face, that black students or queer students or Latino students would not have been up in arms. But because this costume did not represent my friends’ communities, it did not warrant a response,” Jahangiri wrote.

The post attracted comments from students and alumni as well as individuals from well outside the University community, ranging from Massachusetts to Texas to California. Some offered support for Jahangiri and her message while others defended the intentions of the students in the photograph.

Junior Chelsea Whitaker commented on the Facebook post that she had reached out to Vice Chancellor for Students Sharon Stahl about the photo a week ago with no response, and Stahl said she relayed details of the case to the Office of Student Involvement and Leadership. Mike Hayes, executive director of campus life, said he was only brought into the conversation as of Wednesday.

Jill Carnaghi, dean of campus life, spoke at the Student Union Senate meeting about how the University planned to discuss its response to the issue.

Senior Matt Re, president of Student Union, said it is SU’s core mission to make sure all students feel safe and included on campus, and senior Gaby Dinkin, chair of the Diversity Affairs Council, said that the committee had an emergency meeting to discuss the situation and was working on drafting a formal statement.

“We’re not blaming anyone or saying that anyone was being intentionally hurtful, but people in our community were hurt, and that’s what we’d like to focus on,” Dinkin said. “I hope it won’t be a divisive issue but more a moment for everyone to learn and have a discussion.”

Several students felt that the photo and accompanying post warranted an extended discussion.

“A major component of this issue is the fact that students are not coming in direct contact with each other to discuss it,” freshman Laken Sylvander said. “It is very much limited to online debate, and I feel like a lot more can be said that may be more honest from certain people, but [that] is not necessarily the kind of respectful community that we expect and the dialogue that takes place here, and I think that removing it from the online community and into actual interpersonal dialogue will hopefully be an advancement in the right direction toward where the campus goes with this.”

“I hope that people will view this as an instance to learn from and will be able to have open dialogue and be open-minded and understand where one another is coming from when discussing this issue,” freshman Lauren Chase added, “and that this will lead to positive change on our campus toward a more, not only tolerant but also accepting, environment for people of all races and diverse backgrounds.”

The Muslim Students Association announced early Thursday morning that it will host an open forum in Tisch Commons Thursday evening at 8 p.m.

“This is going to be a space where we can provide basic information for why it is an important issue and why it has hurt and affected students on campus,” Jahangiri said.

The DAC plans to release a statement by the end of Thursday and will be holding office hours in the Student Union office from 1-4 p.m.