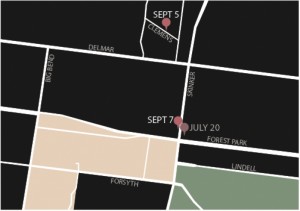 Two armed robberies within a mile of the Danforth Campus in the last several days have left students increasingly aware of off-campus safety issues.

Both robberies happened during the day, one at gunpoint and the other involving a pocket knife. No one was injured in either incident—one that occurred on Skinker Boulevard by the intersection with Waterman Avenue, the other three blocks north of the Tivoli Theatre.

The first of the two crimes involved a 24-year-old part-time student who was walking on Skinker around 6 p.m. Thursday when a man asked to use his cell phone. He let the man use the phone, and the man said he wanted to keep it, according to police reports. The suspect then allegedly displayed a handgun and demanded the victim’s wallet before running off with both.

On Saturday, two women were walking on the 6300 block of Clemens Ave. when a man approached them and demanded their purses while displaying a pocket knife, according to a police report. The crime happened around 2 p.m., but the University did not specify whether the victims were students.

The crimes have left some off-campus students concerned for their safety, though many said they are still more comfortable during daylight hours.

“The main thing it will change, for me, is the level to which I am aware of my surroundings at all times of day,” said Alison Tune, a senior who lives on Waterman.

Don Strom, chief of police for the Washington University Police Department, said that he still considers the neighborhood around the northeast corner of campus to be safe.

“It’s not unheard of, of course, to have incidents that happen during daylight hours. But we don’t typically see a lot of that,” Strom said.

Thursday’s crime parallels a July robbery in the parking lot of the Public Affairs building adjacent to Kayak’s Cafe.

In that case, a student was standing at a bike rack in the 276 Skinker Boulevard parking lot when a man exited his car and demanded the student’s cell phone at gunpoint. The man then took the student’s backpack before fleeing the scene.

“People need to be conscious of what’s going on around them while they’re walking, and should try not to be distracted by other things,” Strom said. “It doesn’t mean because it’s daylight that we should let our guard down and not be observant of those things going on around us or recognize that there might be people watching to see if you’ve got a cell phone and trying to grab it.

“There is that sense during the daytime while you are walking that other people are more likely to see what’s happening…so I don’t think it’s a false sense of security,” Strom added.

Senior Katie Gong, who lived on Pershing Avenue last summer, said she typically felt safer in the area during the day, though the recent robberies—especially the one by Kayak’s—have worried her.

“At night, I rarely walked home by myself, and my friends gave me rides home if I was at their places,” Gong said. “But seeing the incidences that have happened in the past couple of months have made me nervous, especially the one that happened in the Kayak’s parking lot.”