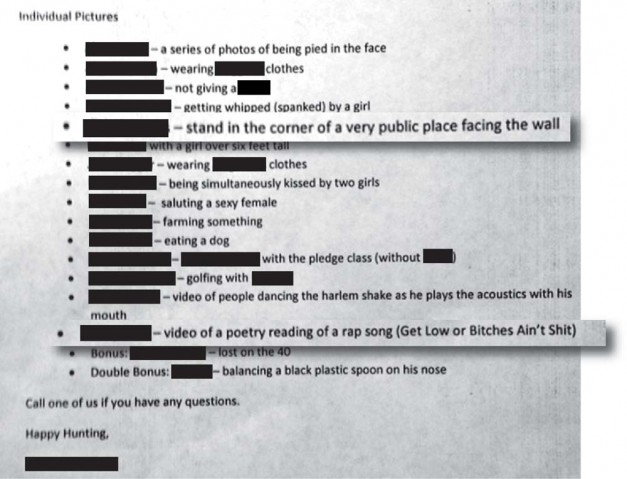 The scavenger hunt list provided to the SAE pledges shown in a photo provided by an anonymous member of the fraternity; relevant passages have been highlighted by the editor.

All Sigma Alpha Epsilon activities have been suspended after a pledge activity turned racially inflammatory.

Several black students eating dinner at Bear’s Den Tuesday night were approached by a group of fraternity pledges who took a picture of a pledge brother standing behind the diners as part of a pledge scavenger hunt.

Later, another SAE pledge began reading the lyrics to Dr. Dre’s “B—— Ain’t S—” in slam-poetry style for the same scavenger hunt. According to a copy of the scavenger hunt instructions, the pledge could also have chosen Lil Jon & the East Side Boyz’s “Get Low.” Both songs contain multiple uses of the N-word.

Sophomore Fade Oluokun said he and the other black students sitting at the table were confused and startled by the pledges’ actions.

After the pledge read the racial slur in the song lyric, Oluokun said he left the table to distance himself from the situation.

“[I] just thought it would be best if I walked away before I did something that I wouldn’t like doing,” Oluokun said. “We weren’t really doing anything. We were just kind of taken aback by it all.”

According to a written account by senior Kayla Webb, the pledge who recited the inflammatory lyrics later approached the group of black students and apologized.

SAE is currently operating under a cease-and-desist order from its national organization, and Washington University has indefinitely suspended all of the chapter’s activities as it continues to investigate the incident.

Fraternity president and junior Michael Zissman apologized for the actions on a Facebook thread but did not provide additional comment.

Inter-Fraternity Council president and junior Joe Craig issued a statement distancing the students’ actions from the council and chapter of SAE.

“The actions of the Sigma Alpha Epsilon pledges are not consistent with our values, or the values of the Sigma Alpha Epsilon fraternity, and we are confident that the responsible parties will be disciplined accordingly,” Craig wrote. “The exact details of the incident are being investigated, and we have no doubt that the necessary steps will be taken to create an environment in which individuals can learn from the mistakes made in the past and attempt to move forward in creating a more understanding and accepting community. Our community’s next steps are to focus on healing and bringing the underlying issues of this incident to light.”

Sharon Stahl, vice chancellor for students, said in a campus-wide email Wednesday that the behavior is entirely discordant with the University’s belief in diversity.

“It’s very important to understand what happened, and we’re in the process of determining that right now in as prompt and thorough a manner as possible,” Stahl told Student Life. “What happened last night is a very serious thing to happen in our community just because it’s not who we are. I’ve been a working part of this community since 1988, so this isn’t just a place I work—this is my family.”

SAE’s national headquarters said in a statement that it apologized for the members’ actions and is collaborating with the University to find more details.

Lucy Morlan, assistant director of Student Involvement and Leadership for Greek Life, said her office is continuing to investigate the incident to make sure it responds properly.

“This is obviously…nothing we’d want for this campus, but we also want to give the investigation its due process and make sure we get the full picture and figure out the best way to make change. We want to be purposeful about a proper response about moving forward and how to address this and make sure it stops happening so all students feel safe and like they’re being treated fairly,” Morlan said. “Some people want swift action, but we need time to make sure we handle it well since this is a situation that’s impacting so many people, so we want to pay respect to all constituents.”

Sophomore Reuben Riggs, president of the Association of Mixed Students, said the incident is an unfortunate sign that the group has a long way to go in promoting an accepting campus atmosphere.

He said that he personally considers the slur symptomatic of a wider campus culture that tolerates casual discrimination.

“This is beyond an individual incident. This is beyond SAE, beyond Greek Life. This is a Wash. U. problem,” Riggs said. “They’re from a culture that allows it and deems it to be OK, which is why I think there needs to be a really strong reaction.”

“Clearly it’s a derogatory song, but also there are homophobic parts to it, and in the title itself it’s very misogynistic and anti-feminist,” Riggs said. “We’re going to support [the Association of Black Students] and the black community but also help the community see that this is not just the black community’s problem but other communities’ problem as well.”

An SAE pledge who spoke under the condition of anonymity claimed that the scavenger hunt activity had no objective of racist conduct.

“It is entirely understandable how the event could be misconstrued, and I can say with absolute certainty that every member of SAE is saddened by what happened,” the student added. “However, the extent to which these rumors have spread and the degree to which innocent and unsuspecting, albeit sometimes stupid, freshmen are being persecuted is horrifying.”

The incident attracted national media attention Wednesday when it was picked up by the St. Louis Post-Dispatch and the Huffington Post, among other news outlets. A letter condemning the students’ actions and calling for harsh University action began circulating via social media and gathering signatures from alumni.

“We’re extremely confident that the chancellor will do everything in his power to ensure that the facts are determined and that those involved receive whatever punishment they deserve,” said Adolphus Pruitt, president of the St. Louis City branch of the NAACP. “But in the meantime we will be looking over everybody’s shoulders to try to see what’s going on and to make sure the incident is given the proper attention. And so far it sounds like that is the case.”

“I would hope we use it as a lesson to teach sensitivity…and we utilize this as a lesson to try to heal any damage than anybody may have received from it rather than trying to turn [it into] something that creates a significant negative overture on the University and the makeup of its student body,” he added.

SAE is the third fraternity to be dissolved or suspended this academic year. Sigma Alpha Mu lost its charter in July due to alleged hazing and drug abuse. Sigma Phi Epsilon was suspended in November after violating University policy.

In 2006, SAE was put on probation after several members were taken into custody for selling marijuana. After failing to meet expectations for its return, SAE lost University recognition in 2007 before regaining its house in 2010.

Senior Lamley Lawson, president of the African Students Association, and senior Claudia Gambrah, president of ABS, both said their organizations were not ready to provide statements Wednesday. They plan to release their respective statements on Thursday. The statement from ABS can be found here: http://www.studlife.com/forum/2013/02/28/abs-statement-on-sae-pledge-incident/

Tamara King, director of Judicial Programs, and Michael Hayes, director of Greek Life, could not be reached for comment.

UPDATED 9:22 P.M.: Added links to statements from SAE and ABS.