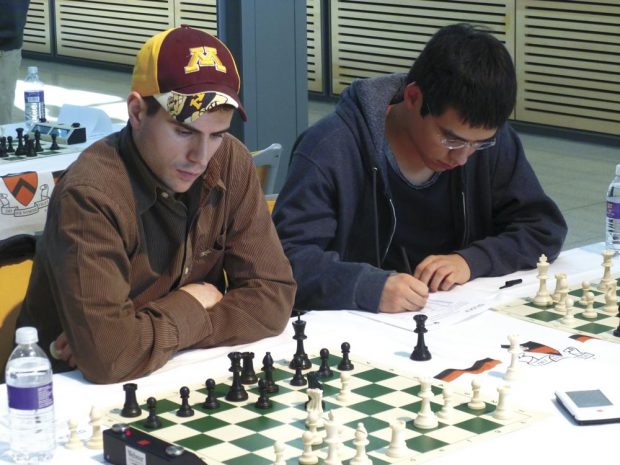 Washington University chess club members Vic Feldberg (left) and Mark Heimann compete in the Pan-American Intercollegiate Chess Championships in Princeton, N.J. From Dec. 27-30, the Wash. U. chess club competed with some of the best chess teams in the country and came home with the Division II championship.

Harvard? Cornell? Neither Ivy League institution put up much of a fight against the Washington University Chess Club in its most recent major tournament.

In its fourth year of existence and third year competing, the University’s ‘A’ team captured the Division II championship title for its best ever finish at the Pan-American Intercollegiate Chess Championships, held in Princeton, N.J. from Dec. 27-30. The victory earned the chess club a trophy and $125 in prize money.

In addition to the team title, sophomore Mark Heimann finished as the second most successful player in the tournament with four wins and a draw in six matches.

“The competition was quite stiff, but I think that was true for all of us,” Heimann said. “A number of the teams we faced had internationally titled players even on their lower boards. I am pleased with my individual result and am definitely glad to turn out a solid performance, but I’m more excited about the strong performances of my other teammates that led to us netting the Division II prize.”

The tournament was seeded by assigning each player on each team an overall rating; teams with the highest overall ratings compete in Division I. Wash. U.’s ‘A’ team held a rating of 2,181, just 19 points below the Division I cut-off of 2,200.

The Division I championship ended in a five-way split for first, with the University of Texas-Dallas ‘A’ team receiving top honors after a tie-breaker.

In the tournament, each team plays six matches against various other teams, followed by four players facing each other head-to-head. A win is awarded one point, a draw is given half of a point and no points are awarded for a loss. The team that totals the most points in the matchups is given one point in the overall competition. The team with the most overall points wins the championship.

The term ‘grandmaster’ is a title conferred upon a chess player by the World Chess Federation (FIDE) for outstanding play. Graduate student Vic Feldberg defeated grandmaster Fidel Corrales Jimenez of Webster University in Washington University’s second round matchup. Webster’s ‘A’ team featured five grandmasters, and Feldberg earned the Bears’ only points of the round.

“I was just hoping to give my opponent a solid game free of blunders and make him earn the win. I don’t think he took me too seriously though and during the game he made a few inaccurate moves and let me grab the initiative,” Feldberg said. “Once I got the upper hand, I started to push very hard for the full point and eventually he succumbed to the pressure…I felt like David must have felt when he slayed Goliath.”

The chess club also sent a second team that won three rounds and lost three rounds. The team won its last two rounds against Utah and the University of Toronto ‘B’ team, tying for third place in Division III.

None of this would have been possible without a “spur of the moment” decision by senior Jacob Zax in the fall of 2009.

“I expected to find a pretty strong [chess] community here because there are a ton of great, smart people at Wash. U., [but] there wasn’t,” Zax said. “I tried to see if I could find like-minded people and I was very lucky that there were a lot of those people on campus.”

Zax was in Israel during the tournament, but he texted club members as soon as he returned to the United States to learn of the team’s success.

“That Wash. U. has the caliber players to compete with the Ivies and these schools with these huge scholarships is just awesome,” Zax said. “To know that I played a role in making sure that those people had the chance to go to the tournament and that competition [is exciting], because for us it’s a huge deal.”

Zhang said he doesn’t believe this win is the ceiling for the University’s chess club. But if the club hopes to contend for a Division I championship, he said they will need to recruit more strong players and raise the team’s rating.

“I think [the next step] is to attract more talent,” Zhang said. “We will never have a team of grandmasters like with the Websters and Lindenwoods, where they have chess scholarships. But I think that based on the strong academic and overall intelligence and perseverance of the student body, we can have a very strong team.”