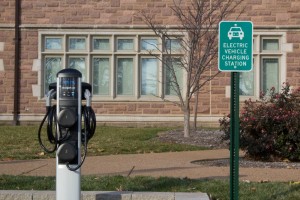 A newly-installed electric vehicle charging station sits outside of Brauer Hall. The charger’s implementation was due to collaborative efforts between engineering students and faculty.

Owning an electric car on campus may have just gotten more tempting.

Last week, the Department of Energy, Environmental & Chemical Engineering installed an electric-car charging station outside of Brauer Hall. Free for any Washington University student or faculty member, the station can charge two vehicles at a time.

University staff members involved in the project hope it will spur a campus trend toward more sustainable vehicles.

“We think the station will motivate people to start buying electric cars,” Department chair Pratim Biswas said. “There are already two cars in the lot that are electric that can use the station, but two is definitely too few. We’re going to implement some outreach programs to local high schools and community colleges to spread the word, and there has already been a donation from an alum towards this goal.”

While Biswas noted that there are not many electric cars on campus, he hopes that the presence of the station will serve as a catalyst in that direction.

The WeCar car sharing service has announced that it will soon have an electric car for student use. This car will use the charging station located outside of Brauer Hall to refuel and will be available to any students with a WeCar membership.

Implementation of the charging station was based on sophomore chemical engineering major Elizabeth Mohr’s independent study program. Mohr approached Biswas at the beginning of the semester in search of a project dealing with environmental sustainability.

“He proposed I research electric vehicles since the department was already doing research into getting a charger,” Mohr said. “I spent most of the semester looking up things about stations, how batteries worked, and electric cars versus hybrids and gasoline-fueled cars in general.”

Once she finished gathering her research, Mohr proposed her findings to Biswas. Along with other members of the department and Ameren, a Missouri-based energy company, they selected a brand of charging station. After this, the machine was paid for and installed by the University’s parking department.

While some students have expressed positive feedback about the University’s attempt to continue going green, some doubts over its level of effectiveness have risen.

“I think it’s great that the school is taking steps to becoming more sustainable, but I just don’t think it’s all that practical since most students don’t drive electric cars,” sophomore Sandya Muchimilli said. “I don’t think a shift towards driving electric cars would happen for a long time either.”

According to data Mohr gathered on local energy sources, driving an electric vehicle in St. Louis is preferable to driving a gasoline-fueled one, but not more energy-efficient, in terms of greenhouse gas emissions, than a hybrid car.

“It’s important to remember energy can be generated through many different methods, and we won’t be able to use hybrid cars based on gasoline forever since gas isn’t a renewable resource,” Mohr said. “This station is a good beginning point to see if electric vehicles have the potential to become more mainstream in the future.”

Researchers in the department will be gathering data from the machine by monitoring how much the station is used and looking into how exactly the battery in the car functions. While the machine currently runs on a grid, the goal is ultimately to have it fueled by solar panels.

“Our department is heavily focused on research in sustainable energy fields, especially solar energy,” Biswas said. “This new charger not only helps to promote alternate methods of energy, but also will allow us to extrapolate data in order to generate further research.”

Many members of the Department of Energy, Environmental & Chemical Engineering will be attending the International Symposium on Energy and Environment in Mumbai, India from Dec. 6-12. While there, they will be presenting information on the charging station.

“We wanted to make sure we had the station installed and some data collected from it before the symposium,” Biswas said. “The whole process—researching the data, picking a charger and installing it—was completed within the semester.”