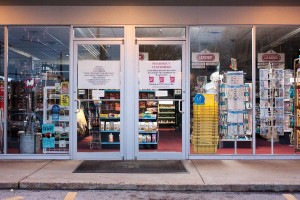 Williams Pharmacy, the family-owned pharmacy located just across from the North Side, closed its doors on Tuesday after the Williams family sold it to Walgreens. Signs in front of the stocked shelves inform customers that prescriptions will be transferred to Walgreens.

Williams Pharmacy, a St. Louis institution since 1952, closed for good on Tuesday.

The pharmacy, located on the corner of Big Bend Ave. and Forest Park Parkway, had been serving Washington University students for 59 years. But the Williams family, who owned a chain of four pharmacies in St. Louis, sold three of them, including Williams, to Walgreens.

The pharmacy sold prescriptions and over-the-counter drugs as well as toiletries, snacks and wine. Its closing came as a surprise to customers, who have been coming to the location all week with the expectation that the pharmacy would be open.

Walgreens will not be opening another drugstore in the facility. The next nearest drugstore for students is the Walgreens south of campus near Schnucks.

“I liked Williams because it was a small neighborhood pharmacy and it was easier to go there and pick something up than go to Walgreens,” senior Phil Paradise said.

Students living north or just west of campus will now have to go farther to Walgreens, Target, Schnucks or to SHS to meet their medical needs.

The prescriptions from Williams Pharmacy have been put into the Walgreens database, and now the Walgreens automated phone message says, “Walgreens would like to welcome William’s Pharmacy customers.”

“We’ll make this a seamless transition for those customers,” Walgreens spokesperson Robert Elfinger said. “We thought [buying and closing these stores] was a good opportunity to serve more patients in the St. Louis market.”

Elfinger would not disclose how much Walgreens paid for the pharmacies. A Williams spokesperson could not be reached on Sunday.

Student Health Services sometimes referred students to Williams if they needed something after hours or had a prescription for an antibiotic or pain pill that SHS couldn’t fill until the next day, SHS pharmacist Shannon Gergen said.

“Now we’ll end up having to suggest Walgreens,” Gergen said.

Students will also have to go elsewhere for over-the-counter drugs, which Gergen says SHS carries but only gives out by prescription. He says this is because of the University’s policy of avoiding products with sales tax as much as possible.

“It was convenient and when you’re sick, you don’t want to trek all the way to Walgreens to get your meds, especially if you live in the Village,” junior Sophia Fox-Dichter said. “It had everything you need and the people were friendly.”

The Williams pharmacies were run by two brothers, Brett and Rick Williams. Their father, Maurice, started the franchise.

Williams also sold the Clarkson Square Pharmacy in Chesterfield and Prescription Plus at 5 Maryland Plaza in the Central West End. Their Ladue location remains open and is run by the family.

“My family and I have been committed to serving this community my entire life,” Rick Williams said in a press release on the Williams Pharmacy website. “I’m proud to own and operate Ladue Pharmacy and I’m excited about the future of our business.”