WU students reluctant to use Google+ despite its popularity 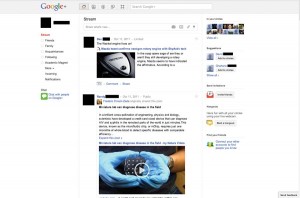 Google’s efforts to expand the usage of its new social networking site, Google Plus on college campuses do not seem to have found much success among students at Washington University.

Many University students have elected not to start Google Plus accounts, or simply do not use them.

Still, since its launch this summer, Google’s new social networking site has accrued over 40 million users.

project,” Iska Hain, a Google spokesperson, wrote in an email to Student Life. “This is just the beginning, there is a lot more to come.”

Many students who do use Google Plus complain that there are not enough other users.

“No one that we know [uses Google Plus],” junior Stacy Berg said. She noted that the social networking site would be more desirable if more people that she knew were Google Plus users.

According to Hain, Google Plus is introducing marketing initiatives to build brand recognition on college campuses.

However, some students said that Google Plus doesn’t live up to the hype.

“I thought it was going to be more popular, and I thought people were actually going to use it. Maybe I just don’t know the right people,” senior Rebecca Salisbury said. Salisbury joined Google Plus over the summer to connect with friends.

“My friends and I stumbled across [Google Plus], … and we decided we wanted to try it out. I like the interface better [than Facebook’s], but there just aren’t enough people on it, so I stick to Facebook,” freshman Neel Erickson said. “Few people know about it and a lot of people still think it’s an exclusive thing.”

According to Google, user practicality is a priority.

“Google Plus aims to make sharing on the web more like sharing in the real world,” Hain wrote. “In the case of college students, Google Plus is particularly good for sharing specific information with specific groups of people.”

Some students said that Google Plus doesn’t offer anything new to the social networking scene.

Google hopes to change this conception by informing potential users of the unique features Google Plus has to offer, which center around its connection to other, more popular Google applications.

“Google Plus is more than just a social network; it will have an impact on how people interact across all of Google,” Hain wrote.

Many students, though, haven’t felt the need to join Google Plus.

“I heard that Google Plus is really confusing to use, [and] not a lot of my friends have Google Plus,” freshman Eunice Koo said. “Unless Facebook makes drastic changes… I can’t imagine anything that would really get me to move to Google Plus.”