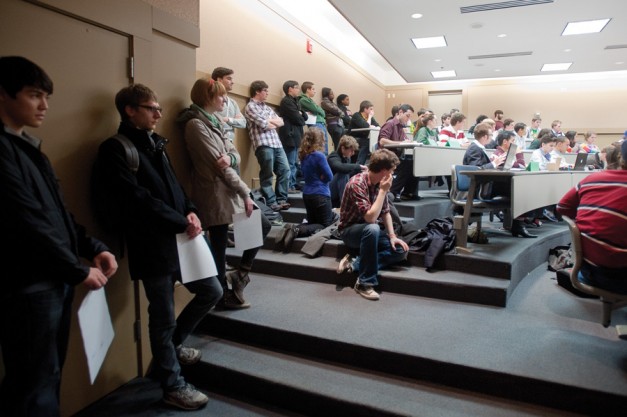 The proposed speaker that had Washington University students in an uproar for nearly two days is no longer scheduled to appear on campus.

Bristol Palin, 20, was expected to be the keynote speaker at this year’s Sexual Responsibility Week. But her $20,000 price tag led students to contest Student Union Treasury’s funding decision, arguing that she is unqualified to speak about the subject of abstinence on a college campus.

Palin, the daughter of 2008 Republican Vice-Presidential nominee Sarah Palin, had a child when she was 18 and is now an ambassador to The Candie’s Foundation—a foundation that encourages abstinence as a way to prevent pregnancy among teenage girls.

Kathryn Plax, a pediatrician and the director of the Adolescent Center at the medical school is slated to take Palin’s place in the panel discussion on sexual abstinence. Hosted by the Student Health Advisory Committee, the panel discussion will still be in Graham Chapel on Feb. 7.

Scott Elman, president of SHAC, said that both SHAC and Palin agreed that the controversy surrounding her appearance would overshadow the event’s intended message of sexual responsibility. Palin had never signed a contract committing to her appearance.

“The decision was 100 percent mutual,” Elman said. “SHAC stands by our decision to extend an invitation to Bristol, but we understand that a lot of our original intentions for discussing abstinence on campus, as well as sexual responsibility, were going to be lost.”

Elman originally said that SHAC invited Palin because they thought a big name would spark discussion on campus. The group also wanted to address abstinence, a position that has scarcely been addressed in past Sex Weeks.

On Tuesday evening, Treasury voted to approve SHAC’s $20,000 appeal to bring in Palin and the three other members of the panel.

According to SU VP of Finance Eliot Walker, SHAC will now have to return the $20,000 and resubmit an appeal to fund the new panel. If the group’s new appeal is less than $1000, as Walker said is expected, SHAC can take its request straight to Walker for approval, as opposed to going through another round of a Treasury vote.

Junior Ryan McCombe said that the announcement that Palin would not be coming to campus was a victory for the student body. McCombe was one of many students who protested Treasury’s funding of Palin’s appearance at Wednesday’s Senate meeting.

“I am glad that in the aftermath of [Wednesday] night’s Senate meeting, SHAC was able to take a moment to listen to what all the students had to say, and to think about it critically,” McCombe said.

At the Senate meeting, two students held signs that read, “Can I get paid for an accident too?” The College Democrats and Republicans created a bipartisan petition in the hopes of securing enough signatures to get a referendum on Treasury’s initial approval.

“We are happy that SHAC, and Bristol Palin herself, responded to the student body’s concerns,” said sophomore Sherveen Mashayekhi, president of the College Democrats. “It’s a sad state of politics at Wash. U. when Bristol Palin is what required us to get politically active.”

The overwhelming disaproval of Palin as a speaker caused students to question the efficacy of Student Union and whether the student government actually represents students’ interests.

SU President Morgan DeBaun issued a statement in response to the criticism and said that SU is examining its procedures to allow for increased student input in SU decisions.

“We are receptive to student concerns and feedback and look forward to working closely with their constituency for the rest of the term,” DeBaun wrote in the release.

While Elman said he thinks that the main message of Palin and Sex Week got lost amid the protests, he hopes that students still show up in high numbers to the panel.