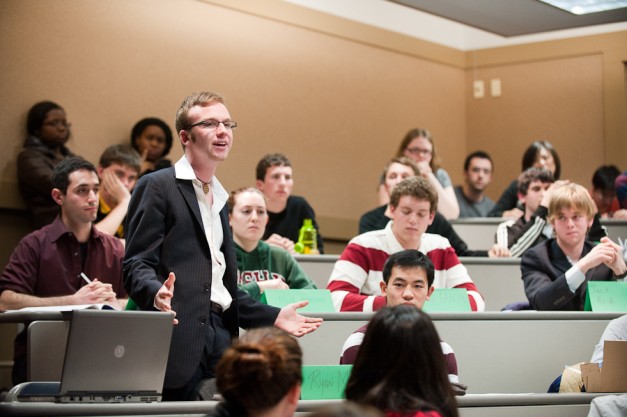 Junior Ryan McCombe speaks out against Bristol Palin's selection as keynote speaker for Sexual Responsibility Week at Wednesday night's Student Union Senate meeting. Students were jammed against the walls of the filled room as senators and discontented students voiced anger, suggestions and occasionally support for the panel.

Students seeking an outlet for frustrations over Student Union Treasury’s decision to fund a panel featuring Bristol Palin for $20,000, made their voices heard in Wednesday’s session of the Senate.

In a room filled to capacity, senators and discontented students voiced anger, suggestions and occasionally support for the panel.

Freshmen Gabriel Hassler and Michael Harding waved a sign that read “Can I get paid for an accident too?”

As news outlets from the Huffington Post to Fox covered the story of Palin’s potential position in the Sexual Responsibility Week speaker lineup, students formed Facebook groups and an online petition in protest. A Facebook group titled “No thanks, Bristol” organized by the Wash. U. College Democrats had over 750 members by Wednesday night. 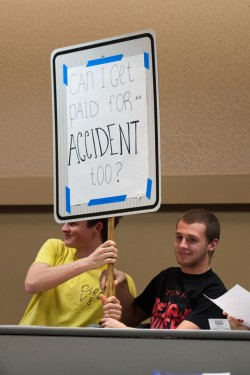 SHAC President Scott Elman maintained that the group choose Bristol Palin because she is the highest-profile case of teen pregnancy in the nation, not to incite controversy.

While students at the meeting explored various possible avenues for canceling the speech, none ended successfully.

A student petition with five percent of the student body, or 302 undergraduates, calling for an appeal would ensure a referendum vote. Due a stipulation in SU’s Constitution, however, the referendum could take place no earlier than Feb. 6th. Palin’s speech is set to take place Feb. 7th.

A referendum vote against the panel would only have an effect if the contract were not yet cemented. While Palin has not yet agreed to speak on campus, SU members argued against the petition since any agreed upon contract would be signed more than a day prior to her appearance.

While one student suggested that SU President Morgan DeBaun veto the funding using executive privilege, her veto does not extend to allocations.

A final proposal, introduced by senior Benjamin Reiter, involved the recall of all seven affirmative Treasury votes. Junior Betel Ezaz, a senator, called the solution disrespectful to Treasury members who were advocating for those students in support of Palin and killed the proposal. Ezaz added that the anger over Bristol Palin’s speech was unwarranted.

“I’m disgusted about the fact that so many people are opposed to her coming because she’s a polarizing figure,” Ezaz said. “She’s going to present her life, that’s it.”

Students plan to continue with the petition, whether or not it may yield any results.

College students across the nation have taken notice of Palin’s possible appearance, and they are adding to student pressure to fight the event.

“I have been getting emails, text messages [and] phone calls from people at universities across the country, laughing at me. Everyone is so riled up about this that there’s not even a point of bringing her here, nobody is going to be able to listen,” junior Ryan McCombe said.