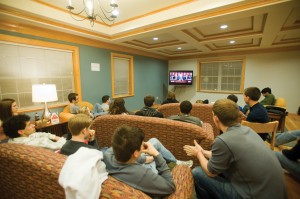 Students gather in the common room on the first floor of Gregg Hall to watch the State of the Union address delivered by President Barack Obama on Tuesday. The College Democrats hosted the viewing party.

President Obama on Tuesday pushed for widespread improvements to the nation’s education system in laying out his vision for improving the country’s future and keeping the economy competitive with growing global powers.

Citing current and future education challenges facing the country, Obama told a joint session of Congress to invest in schools and make college more affordable. His education proposals were part of a broader vision he outlined to ensure the United States could “win the future.”

“If we take these steps—if we raise expectations for every child and give them the best possible chance at an education, from the day they’re born until the last job they take—we will reach the goal I set two years ago: By the end of the decade, America will once again have the highest proportion of college graduates in the world,” Obama said in his nationally televised second State of the Union address.

Obama called for some policies that would appeal to college students, such as an extension of his college-tuition tax-credit program and investments in academic research. But he urged bipartisanship and veered toward the center on economic, fiscal and environmental issues that younger voters more often take progressive stances on.

“I think that there’s a new reality in Congress, and I think his speech addressed that reality, but at the same time he talked about immigration, education…a lot of these are progressive ideas that in a speech he may have stayed away from talking about,” said sophomore Anna Applebaum, vice president of the College Democrats.

Obama declared that America was “home to the world’s best colleges and universities, where more students come to study than any other place on Earth.” But, adding that a higher proportion of future jobs will require a college degree, he said the country desperately needed to make college more affordable.

The president noted that one of his administration’s proposals overhauled the lending system and stopped subsidies to banks for extending loans to students. He asked Congress to go further by permanently renewing his tax-credit program that gives college students $2,500 a year toward tuition.

The president said he was especially concerned that many of America’s brightest students are non-citizens and international students: “But as soon as they obtain advanced degrees, we send them back home to compete against us. It makes no sense.” Obama cited that concern to call for immigration reform, an issue that made little legislative progress in the last Congress.

“His platforms of [Race] to the Top and tuition tax credit really speak to his understanding that a nation is only as strong as its up-and-comers,” he said in a statement, adding that he was satisfied with Obama’s “thoughtful bipartisanship.”

But Obama’s proposals come as the country grapples with continuing budget deficits, and as newly emboldened Republicans in Congress press for deep spending cuts that could affect education funding.

Obama acknowledged that the country would need to cut spending and that he would need to work with both parties. But he warned that cutting investment in education and innovation to close the deficit is “like lightening an overloaded airplane by removing its engine.”

And he targeted the Bush tax cuts in seeking to preserve federal funding for education. “Before we take money away from our schools, or scholarships away from our students, we should ask millionaires to give up their tax break,” he said.

Sophomore Matt Callahan, a self-identified centrist independent who mostly approved of Obama’s speech, said he especially liked the president’s willingness to compromise and his emphasis on cutting the deficit and expanding education.

He sounded a note of skepticism, though.

“I’m going to have to research how he’s planning on building all these programs but also cutting back so much. He’s kind of saying these two things that do seem contradictory,” he said.

Obama’s State of the Union comes after a lame-duck session in which Congress repealed “don’t ask, don’t tell,” the military’s ban on gays serving openly. Obama called on colleges and universities where military recruiters are banned to allow them to return.

Students agreed on one thing they didn’t like in the speech: They said he didn’t talk enough about foreign affairs and national security, especially the ongoing wars in Iraq and Afghanistan. “He talked a little bit about very specific things, but I wanted to hear if there was a wider plan,” Applebaum said.