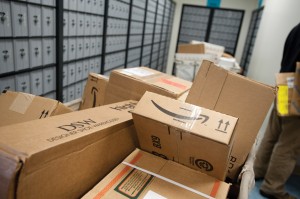 Unsorted packages sit in bins inside the South 40 Mailroom. According to Mail Services Manager Peggy Smith a high volume of incoming packages has led to a multi-day backlog preventing some students from receiving their textbooks.

Packages stacked as tall as students have backlogged the South 40 mailroom, preventing many from receiving the textbooks they ordered online.

Mail Services Manager Peggy Smith attributes this delay to an overwhelming number of students ordering books online at the start of the semester.

But with the second week of class approaching, students are already being assigned readings and problem sets, both of which require them to have their books.

Sophomore Mark Dally has resorted to borrowing a textbook from a classmate in order to complete assigned work.

While some students have said that the backup seems to be worse than in previous semesters, Smith said that this is not the case.

“We get hundreds of packages a day, and we have to sort them one by one with names and addresses. This is always a challenging time. This semester is no different from any other,” Smith said.

Dally said he hasn’t noticed much of a change from last semester. In the fall, he waited an extra three days after his books arrived before he received an email telling him he could pick up his mail.

Other students who are able to track their textbooks online have also had to wait a few days for their packages to be processed.

Freshman Rae Lerner said the UPS tracking system indicated her books arrived in the mailroom on Tuesday, but she did not receive an email to pick them up until Thursday.

Lerner didn’t need her books for the first day of classes, however.

Sophomore Erin Woo used Amazon two-day shipping for the books she ordered last week. While the books have arrived at the mailroom, she still has been unable to pick them up.

“People pay extra for fast shipping, but don’t get it because [the mailroom] is so booked,” Woo said.

Woo also said she has heard of students waiting in 45-minute lines to pick up their books from the mailroom and suggests that the mailroom might benefit from extra staffing during the first few weeks of the semester.

To alleviate the problem in future semesters, Smith pegs responsibility on the students themselves.

“Students should order at least a week before they arrive to speed up the process. We’re open all week, so that would be really helpful.”