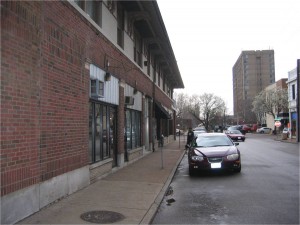 Construction near the Delmar Loop blocking off the Melville Avenue sidewalk started on Monday. As a part of the Centennial Greenway Project, which aims to connect Forest Park with Creve Coeur Park, a 10-foot-wide sidewalk for pedestrians and bikers will extend from Kingsbury Boulevard to the Delmar Loop.

Students living north of campus have adjusted their walking routes to class after construction blocking off the Melville Avenue sidewalk started on Monday.

The construction is part of the Centennial Greenway project, funded by the Great Rivers Greenway District. The goal of the project is to connect Forest Park with Creve Coeur Park by an eighteen-mile trail of “greenways,” which are designated paths for pedestrians and bicycles.

“Wash. U. has been a partner of Great Rivers Greenway since they came up with the concept of the Centennial Greenway,” said Cheryl Adelstein, the director of community relations and local government affairs. “Their vision was that it would come down Forsyth, across campus, and use existing assets like the Forest Park Parkway Overpass, the Greenway Walk and the Ackert Walkway north of the Loop.”

The plan for the path on Melville, extending from Kingsbury Boulevard to the Delmar Loop, includes a 10-foot-wide sidewalk for bicycles and pedestrians, along with a four-foot wide “amenities zone,” which will include trees, more lights and blue poles.

“Any existing Wash. U. properties will see some fairly substantial landscape and structural improvements, such as new retaining walls and new staircases,” Adelstein said. “Anything that is adjacent or abuts our property will be impacted.”

Elizabeth Sedillo, a bus driver for the Green Line Metro shuttle, which goes from Mallinckrodt Center to Greenway Apartments, did not know about the construction until it started on Monday, when she realized that her usual route had been blocked off and had to make a U-turn.

“I did not expect the street to be closed off,” Sedillo said. “I was not happy with them because the cones were really close and I had to get out of that situation. I did not like that I was not told beforehand.”

According to Sedillo, past construction in University City had not affected bus routes; as a result of the changes. She worries that the current construction can create safety concerns. While the Green Line had previously been able to drop off Greenway residents in front of the apartment, the bus can now only take students to Avenue A, the alley between Washington Avenue and the Loop.

“I know that Wash. U. is very concerned with safety,” Sedillo said, “But I have had to drop off people in the alley, and I am sometimes worried about whether they will get back safely. In the past, they made sure we could get through and go around on Melville.”

“We received notice in August that they would be proceeding, but we were not notified about the Monday construction until last Friday,” Adelstein said. “The University has some concerns about the construction zones and the rerouting they put in place, so we are working with Great Rivers Greenway to see what adjustments can be made to address issues about students’ safety and security.”

Now that the sidewalk is closed and construction is underway, students have had to walk in the street of Melville or use alleys as shortcuts.

“It is not a big deal to walk around it,” junior Amanda Matheson, a resident of Greenway, said. “It does not bother me that they start the jackhammer early because I am already awake, but I know my suitemates are bothered by it because they are trying to sleep.”

“I am on the third floor, so I do not hear the construction much,” junior and Greenway resident Anastasia Niedzielski said. “It has been kind of irritating to change how I walk to campus, but I just walk between the buildings now.”

According to Adelstein, the project will also remove parking on the west side of Melville. In order to compensate for the lost parking spots, Great Rivers Greenway plans to add an additional parking lot on Washington Avenue later in the project.

According to project coordinator Sarah Stanton, the construction should be done in February. The construction is, however, contingent on the weather and could go on for longer or shorter than currently expected.

Niedzielski is optimistic about the impact the construction will have once it is complete.

“It will be nice not having to worry about avoiding bicycles anymore,” Niedzielski said. “Having more lights should increase safety in the area.”