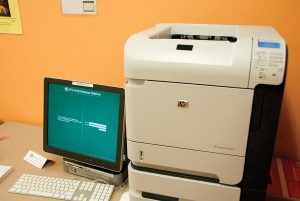 Last November, Student Technology Services implemented a program called PaperCut aimed to reduce printing waste by requiring students to release documents from a separate computer terminal, instead of printing directly from their own computers.

In an effort to reduce printing waste, Student Technology Services implemented PaperCut last November. Though the program has been in effect for almost a year, its efficiency is still unknown. The program attempts to balance the University’s goals for sustainability with the needs of students to print documents for classes. Students’ responses to the system have been both positive and negative.

PaperCut requires students to release documents from a separate computer terminal, instead of printing directly from their own computers. At the dedicated document-release terminal, students can cancel print orders, print documents individually or print all the documents in their queue. Student Technology Services (STS) saves all print orders on a network for several hours, and users can release documents from any STS-managed computer lab on the South 40 or North Campus or in the University-owned apartments.

The program does not charge students for printing in these computer labs, but it does monitor their use.

According to Barbara Braun, director of STS, it’s too early to tell if PaperCut has had any effect on students’ printing habits. Because a full year has not yet passed since the program’s initiation last November, making comparisons at this point cannot account for the variation in printer use over the course of the year.

PaperCut will be used for the rest of the academic year; STS will not implement a quota and will continue to provide free printing in dorms.

Many students have positive opinions regarding PaperCut. The extra step in releasing documents to the printer encourages students to think before printing and prevents unnecessary print orders.

“It’s more inconvenient to go to the printer. I think it definitely does reduce printing because sometimes people print stuff and forget about it or decide they don’t want it anymore,” sophomore Simon Hsu said.

Freshman Jordan Peters added that students may be more inclined to look at handouts directly on their computers to avoid printing at the terminal.

While this extra step may reduce waste, some have pointed out that it also noticeably reduces printing efficiency. For students in a time crunch, PaperCut can be a hassle.

“It definitely slows down the process. If the computer lab is extremely crowded, it makes it that much more difficult to expedite the process,” sophomore Justin Nicks said.

Whether students love or hate PaperCut, STS will continue to monitor printing in all STS computer labs.

Braun plans to gather a full year’s worth of data and then create a student group in January or February to crunch the data, with the goal of producing a recommendation by March or April.

Meanwhile, the Student Technology Advisory Committee collects printing data on a weekly basis. Braun sends e-mails to the users who print the most to inform these students of their environmental impact. One student printed 1,439 pages last week.

“All 4,000 residential students have to share this resource, and we have ten out of 4,000 eating up 25 percent of this resource. It’s not fair for all the other students. Generally, you don’t see them on [the list of top ten printers] a second time,” Braun said.

Braun uses software to convert the energy, paper, and toner use associated with printing to more tangible data such as the percentage of a tree consumed, the amount of CO2 produced and the equivalent time a light bulb could be left on.

Although STS does not currently service printing on main campus, Braun says that other University entities are working toward a campus-wide printing program.