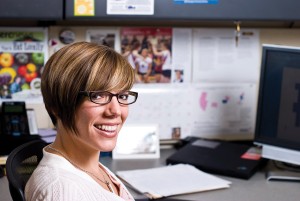 Saida Bonifield was recently hired as the new Coordinator for LGBT Student Involvement. She hopes to serve as a resource for students and to continue improving the campus community.

Saida Bonifield was named the new coordinator for lesbian, gay, bisexual and transgender student involvement and leadership at Washington University this summer.

Bonifield was the LGBT coordinator at the University of Kansas while she was in graduate school and wanted to continue in the field.

“We are excited to have Saida Bonifield join us to continue the momentum that the first coordinator has done since 2007,” said Julia Macias, assistant director of campus life. “Under Saida, we hope to continue to help [present] Wash. U. as a welcoming experience for all students.”

According to Macias, who was spearheading the hiring process, a new coordinator was actually hired in November 2009 and scheduled to fill the post in January 2010. But because of family reasons, the new coordinator ultimately passed on the job. The University reopened the search process in January 2010 and Washington University was without an official LGBT coordinator for much of the 2009-2010 school year.

Michael Brown, the previous coordinator, left after September 2009, Macias said. “During the [interim], we had the help of two graduate students to continue the work of the coordinator position,” Macias said. “The LGBT advisory board, which is made up of faculty and staff, was also very helpful during that time.”

Finally, in the summer of 2010, the University hired Michael Brown’s successor, Bonifield.

“I wanted to continue my work as an advocate, but in a different context,

Bonifield said. “Working with college students specifically on issues related to sexuality and gender seemed to be a logical next step for me [after graduation].”

In 2006, Chancellor Mark Wrighton appointed a task force to investigate the possible help and resources that could be allocated to the LGBT community on campus. The position of coordinator for LGBT student involvement and leadership came about as the task force determined that more visible support was needed for the LGBT community on campus. The position was created in May 2007 via a Student Union resolution.

With the new coordinator in place, LGBT is expected to continue pursuing its mission of creating programs and resources to support the recruitment and retention of a diverse student body with particular attention paid to the needs and concerns of the LGBT community.

“My predecessor, Michael Brown, laid the framework for the LGBT student involvement and leadership position,” Bonifield said. “I hope to continue his efforts and work with students and the LGBT advisory board to pursue new LGBT-related initiatives.”

Bonifield indicated that first and foremost, she hopes that students will continue to see the LGBT coordinator as a resource for them.

She plans to work on a graduate and undergraduate mentorship program, a special graduation ceremony, an initiative for alumni engagement and the annual Holobaugh Honors. She will also be acting as the advisor for various campus groups such as Pride Alliance, Safe Zones, Open and the Alternative Lifestyle Association.

“I think it’s important to make sure that students are involved in all levels of the decision-making process,” Bonifield said. “I look forward to responding to current issues and continue to improve the current structure of the position.”

So far, Bonifield has been working closely with student groups.

“We have contact with her on a weekly basis and [Saida] is extremely helpful with the planning of events to reach a larger audience,” said junior Adrienne Sands, the co-president of Pride Alliance. “She is very involved in helping us with the reorganization of our constitution. She is also very active in bringing the different LGBT student groups together.”

Bonifield received a Bachelor of Arts degree from the University of Kansas in Spanish literature in 2005. She spent three semesters abroad during college, including one year in Costa Rica and a semester in Spain.

When she was not studying abroad, she volunteered at the local domestic violence shelter and helped to organize various related campus events like Take Back the Night, Domestic Violence Awareness Month and Sexual Assault Awareness Month.

Upon graduation, Bonifield lived in San Francisco for a year working in the non-profit field before returning to Kansas to work full time as an advocate for survivors of domestic violence and sexual assault. She continued this work before deciding to make a career change and pursue a master’s degree in higher education administration.