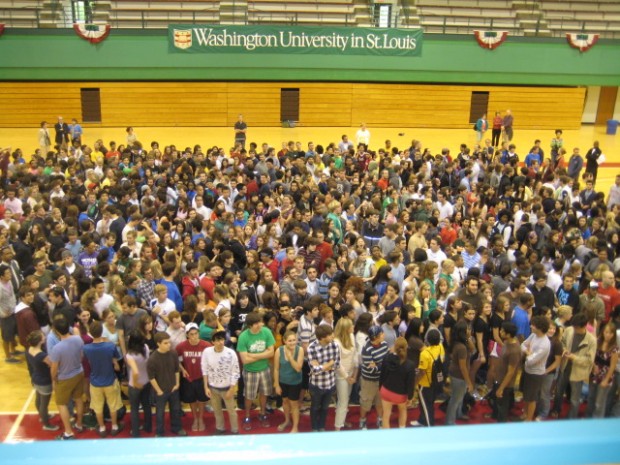 On Sunday afternoon, 710 members of the Class of 2010 gathered in the Field House of the Athletic Complex, just like they will at Thursday and Friday’s graduation ceremonies. But instead of receiving diplomas, they received massages—and a place in the Guinness Book of World Records.

The Senior Class Council organized the event in an effort to unite the senior class for a final, lighthearted accomplishment. “We thought breaking a world record would be a fun and interactive way to bring everyone together,”  Senior Class President Fernando Cutz said.

Guinness requires that the massage chain last for 3 minutes, and Cutz counted down the minutes with a megaphone. A Guinness photographer was on hand to document the massage, and 15 independent community members served as judges.

According to Cutz, the Senior Class Council considered other record-breaking possibilities before deciding on a massage chain.

“Originally we were going to do one where we would put Mentos inside Coke bottles and explode them, but we decided that wasn’t interactive enough. We thought [a massage chain] would be a more fun, more interactive thing to do,” Cutz said.

Chancellor Mark Wrighton, who was present to participate in the massage chain, credits the Class of 2010 for the event’s success.

“I think this has been one of the more organized, more enthusiastic classes in terms of school spirit, and it’s been fabulous to see that enthusiasm at our University,” he said.

This isn’t the first record-breaking attempt that Wrighton has seen from his students: In 2005, 926 members of the incoming freshman class gathered to play the world’s largest game of Simon Says.

But Wrighton was enthusiastic about the Senior Class Council’s particular choice of record.

Cutz said that he hopes the record-breaking event will be something that this year’s senior class can remember after Wash. U.

“It will be very cool to pick up the Guinness Book of World Records and find our name in there as the Class of 2010.”