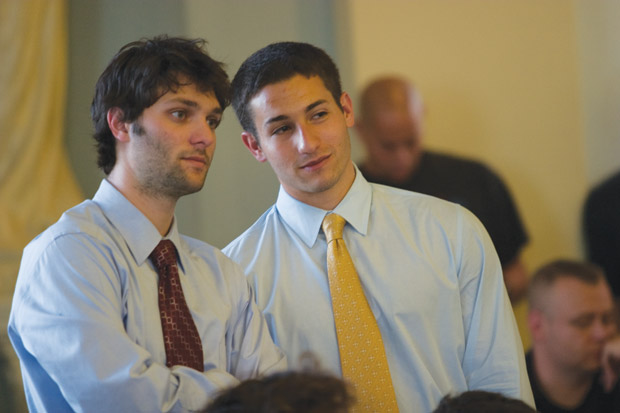 Seniors Wyatt Crane (left) and Andrew Weisberg (right) look on at a University City City Council meeting Monday after speaking about what the city’s zero-tolerance policy implies for students in the area.

On Monday night, senior Wyatt Crane spoke at a University City council meeting about the increasing frequency of the University City Police Department’s invocation of the newly enacted zero-tolerance policy.

Two days later, Crane was arrested outside of his Kingsbury Boulevard apartment after being issued a citation for noise from a gathering that he said he did not even attend.

Crane and fellow senior Andrew Weisberg mobilized dozens of students earlier this week in the hopes of making peace with residents and the city government. His arrest is symptomatic of an increasing number of student arrests that have come at the helm of the city’s zero-tolerance policy, which was enacted this March.

Under this policy, the University City Police Department issues a summons every time it responds to a reported noise disturbance.

Crane said he was walking home around midnight after doing his laundry at the nearby Greenway Apartments when he saw a police car in the back of his apartment and an officer standing on his third floor fire escape balcony.

The door to Crane’s apartment was locked, and no one answered when the officer knocked.

Crane approached the door and the officer asked him if he lived in that specific apartment. Crane confirmed that he did, but explained that neither he nor his two roommates had attended the gathering.

The neighbors across the hall—who are close friends of Crane—had used both of the apartments to host a gathering of approximately 20 people.

Since the noise was emanating from his apartment, Crane said he took responsibility and cooperated with the officer as he was issued a noise citation.

According to Crane’s account, the officer took out handcuffs after issuing the citation and asked him to put his hands behind his back.

When Crane asked why he was being arrested, the officer said that he was “carrying out the procedure under the zero-noise tolerance policy.“

Senior Micah Kroeze, who lives across the hall from Crane, said he watched as Crane was issued a citation and went back inside. Fifteen minutes later, he was shocked to learn that Crane had been arrested.

“For the first 15 minutes that I was there, the officer was not arresting him at all, he was just taking down his information,” Kroeze said. “An arrest was never mentioned. There was no way in my mind that he was being arrested.”

Both Kroeze and Crane said that the officer never read Crane his Miranda rights—as all police officers are required to do under federal law.