“We have felt intimidated and restricted from enjoying our own properties, enjoying any social activities with friends outdoors for fear of police presence and possible citations based on previous experiences.”

The students were responding to a rapid rise in citations and arrests of Wash. U. students in recent months as a result of a newly enacted zero-tolerance policy for noise complaints—a policy under which University City police issue a summons whenever they respond to a reported disturbance.

The majority of the noise violations are concentrated in the area north of campus on Kingsbury Boulevard, Washington Avenue and Kingsland Avenue. These streets are shared with University City residents who are not affiliated with the University.

According to Joseph von Kaenel, a resident of the Ames Place neighborhood since 1972, student disruptions have always been a problem in the neighborhood but the issue has come to a head in recent years because student behavior has become increasingly disruptive.

“The situation has gotten worse because there has not been sufficiently rigorous law enforcement,” von Kaenel said.

At the council meeting, seven students presented personal testimony describing occasions when they felt their rights were violated by the police department since the policy was enacted in March. Neighbors countered these stories with their own anecdotes of how they are constantly kept up by noise at all hours of the night.

Seniors Wyatt Crane and Andrew Weisberg decided to mobilize students to make their voices heard and to strike a compromise with the city over what they feel is an extreme zero-tolerance policy.

The students asked the city to appoint a committee of permanent residents and students to review the policy and deal with ongoing relations.

Prior to the meeting, Crane and Weisberg stressed to students in attendance that their stance was not to attack the positions or responsibilities of the mayor’s office, the police department or residents.

“Our position is simply that the zero-tolerance policy bound these officers’ hands and didn’t let them use the discretion they should have been able to use,” Weisberg said. “This is not about bashing UCPD, this is not about bashing the mayor’s office. This is simply showing that we are an organized group, and we should be respected as such, and we should have a voice at the table.”

The students said that while they should be held accountable for unruly and disruptive behavior, they have been issued citations for behavior that was not disorderly.

Emily Dunn, a junior, spoke at the meeting and said that she and her friends were playing Wiffle ball in the lawn of a Washington Avenue apartment at 2 p.m. when the police came and asked them to stop playing because of noise. The police officers searched for suspicious behavior for half an hour before recommending that the group of students disband.

“Although they did acknowledge that there was no illegal behavior going on, [the police] did encourage us to disperse from the area and perhaps relocate indoors silently somewhere,” Dunn said. “We obliged, and as a result, in the past few weeks with beautiful weather outside, we have felt intimidated and restricted from enjoying our own properties, enjoying any social activities with friends outdoors for fear of police presence and possible citations based on previous experiences.”

Dunn added that the zero-tolerance policy has impacted not only students’ social lives but also their “personal privacy.”

Senior Aaron Bodansky said that he and two friends were stopped by a detective on the way to the Delmar Loop for “laughing too loudly” on Melville Avenue at 10 p.m. on a Friday. The detective, according to Bodansky, asked the students to put their hands behind their backs and sit on the sidewalk. The detective then called in two backup police cars and performed full background checks on all of the students.

“I felt threatened. It was scary, I wasn’t able to talk, I was detained for an excessive amount of time,” Bodansky said at the council meeting. “I just wanted to share this with you because I didn’t feel like I had done anything out of line and I felt that the police response due to this new policy has made it very uncomfortable for me to be walking my neighborhood at night.”

But Kingsbury resident Mondi Ghasedi said at the meeting that even laughing and talking on cell phones echo, and disturb her and other residents.

“Walking up the street laughing might not seem like anything to you, but our entire subdivision is composed of brick buildings,” Ghasedi said. “It echoes. You might as well be in my bedroom screaming next to my bed.”

Since its implementation, Ghasedi said, the zero-tolerance policy has been effective in reducing the noise in the area.

“For the first time ever on a warm night I have actually slept through a night on Thursday, Friday or Saturday,” Ghasedi said. “The only thing our police officers are doing is enforcing the law.”

Ghasedi said that when she moved into her home 10 years ago, graduate students filled most of the neighboring occupancies. Now, she says, students urinate on her lawn and vandalize her property.

It is unclear whether the police incidents that students shared at the meeting were the intentions of the zero-tolerance policy or if these represent aberrant, extreme instances. During the meeting, neither city officials nor Ames Place residents addressed the incidents raised by students, but noted that the police should be commended for doing their job.

After the meeting, however, University City Mayor Joe Adams said that college students are targeted because they fit a profile of individuals with whom problems have been reported in the past. To convey this point, Adams relayed an anecdote of President Barack Obama being stopped by airport security and extensively searched before he was president “just by looking different.”

“It doesn’t make it right or wrong, I’m not saying that,” Adams said. “But that’s just the nature of the beast.”

Cheryl Adelstein, director of community relations at the University, said that although disorderly behavior has been on the increase this year, the perpetrators actually represent only a small portion of the student body. She said she receives two to 10 complaints from neighborhood residents every weekend.

“The levels of vandalism and disrespect seem to be increasing, and I think the residents couldn’t tolerate it anymore,” Adelstein said. “Ultimately I think dialogue needs to happen between the students, police department and the citizens of the neighborhood.”

Although there was no clear resolution by the end of the meeting, the city government expressed openness to dialogue with the students and to the idea of the proposed council. But they stood firm in their position to ensure peace and quiet for the residents.

“I want to thank the police force, police chief and Washington University for enforcing the policy,” Councilman Terry Crow said. “I still believe that the residents have the right to enjoy the peace and quiet of their homes, to raise their kids and to enjoy you as neighbors and to enjoy peace and quiet.”

With additional reporting by Sam Guzik 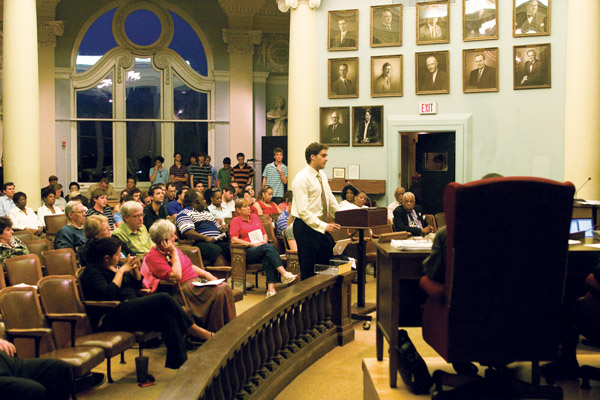