For Paddy: Kilts and coffins, bagpipes and brotherhood 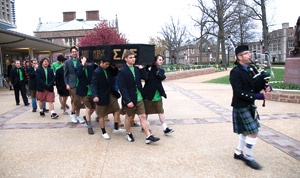 Sigma Alpha Epsilon kicks off the chapter’s annual event, Paddy Murphy week, by reenacting an Irish funeral procession around campus last April. The event is in honor of the legend of Paddy Murphy, a member who was murdered during prohibition due to dealings with Al Capone.

The campus air will be filled with the dark dirge of bagpipes and a funeral procession this week. Men in kilts carrying a coffin will march through the streets, occasionally stopping to dance. This is the highlight of Sigma Alpha Epsilon’s traditional Paddy Murphy Week.

The tradition is meant to commemorate Paddy Murphy, a legendary figure in SAE mythology. According to some accounts, Murphy was a bootlegger from Prohibition-era America who worked in cahoots with the classic American crime boss: Al Capone. While participating in a dealing of bootleg alcohol, Murphy was killed by crime fighter and SAE brother Eliot Ness. In his dying moments, Murphy revealed to Ness that he too was a member of the fraternity. Ness ordered an honorary burial for his fallen brother. And thus, Paddy Murphy Week was born.

The week culminates in this funeral procession, which is all that most of campus sees of the tradition. But there is more to Paddy Murphy’s legacy than that.

According to senior SAE brother and chapter adviser Jon Bremer, there are gentler stories about Paddy Murphy. According to Bremer, SAE brothers were increasingly becoming community hooligans, partying too hard and sleeping around. Murphy came along and dedicated himself to straightening out the fraternity.

Each year, one SAE senior is selected to be Paddy Murphy.

“We choose a brother who exemplifies the qualities of a true gentleman and has sacrificed a lot for the frat,” Bremer said. “We honor [Paddy Murphy] as a metaphor for all the brothers in our frat, or anyone in the community who is a leader in effecting change and realizing when something can be improved upon or something’s wrong and making things better.”

In that spirit, this year SAE is expanding the tradition. In addition to the usual funeral procession on Monday, SAE will be hosting two philanthropy events.

On Saturday, the brothers will be helping the elderly with difficult household tasks such as moving furniture, doing yard work and painting. On Sunday, they will be hosting a car wash in the Hillel parking lot from 1 p.m.-4 p.m.

“The bigger the philanthropy event, the more people will know about Paddy Murphy Week and be able to get excited about it also,” Schreiber said.

Other chapters across the nation do philanthropy for Paddy Murphy Week as well.

The message of the week—steadfast brotherhood—is particularly resonant for Wash. U.’s SAE chapter.

“The week is supposed to represent a strong brotherhood and the connection between SAE [brothers], and it’s especially important to our chapter because of the turmoil we had gone through in the past few years,” Schreiber said. “But we were able to ride it out and continue to improve ourselves.”

“While we’re growing in terms of getting the house back and growing membership, it’s still important to emphasize the close ties we have,” Schreiber said.

With additional reporting by Chloe Rosenberg