Common speaks at Wash. U. 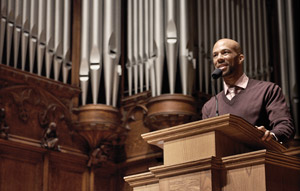 Common speaks in Graham Chapel on Monday as a part of the Martin Luther King, Jr. symposium hosted by the Association of Black Students.

It’s not common for a hip-hop sensation to address the Wash. U. student body.

But on Monday afternoon, Grammy Award-winning rapper Common spoke to a packed Graham Chapel as part of the annual Martin Luther King Jr. Symposium hosted by the Association of Black Students.

Common opened with a rap tailored for Wash. U.: “Yeah, you know what? Yo, I came to rock you. I’m looking at my people out here at Wash. U.”

The rest of his time, however, he strayed from his performing roots as he delivered a speech focused on the universal human purpose to aspire to and achieve greatness.

“I believe that to be great you have to first find your path, find what would make you great. The next step to greatness is to believe in your path,” Common said. “The third step of greatness, which we all have in us, is to live it. Live your path.”

The speech highlighted Common’s positive image in the often-plagued hip-hop industry—an image cemented by his philanthropic work and lyrics that speak to social issues.

Common, or Lonnie Rashid Lynn Jr., is from the South Side of Chicago and is most widely known for Billboard hits such as “Be,” “Testify” and “Go.”

He has also written numerous books geared toward a younger audience, including “The Mirror and Me” and “I Like You but I Love Me,” aimed at raising self-esteem. Common’s acting career includes “Date Night,” “Just Wright,” “American Gangster,” “Street Kings” and “Terminator Salvation.”

After the rap, Common started his speech and discussed the profound effect that the story of Emmitt Till had on him as a middle school student.

Emmitt Till, an African-American from Chicago, was 14 years old when he was beaten to death by a group of white men for whistling at a white woman in Mississippi in 1955.

Common said that Till’s story inspired him to find a purpose in life and have an impact on society.

“I felt the ghost of Emmitt Till saying that you have to do something in life, you have to have a purpose,” Common said. “It was like Emmitt Till was a representation of all the people that had worked and had paid dues and lost their lives and made sacrifices for me and for us. So I knew at that point that I had a deeper purpose, and all of us in here have a deeper purpose.”

His reaction to the story of Emmitt Till was the only explicit reference he made to race throughout his talk.

Instead, he spoke to human experience in general and encouraged the audience to have a voice, contribute to society and learn from their experiences to achieve greatness.

Common drew from the challenges he faced trying to make it as a hip-hop artist and how he stayed true to himself amid pressure to do otherwise.

“It was really meaningful and enlightening how he spoke on a lot of different subjects from homophobia to religion and showed how music can be helpful in culture,” junior Brittany Miles said.

Senior Jeff Nelson, the outgoing student body president, who raps as a solo artist, said that Common is one of his favorite MCs and that the themes in his speech resonated with him.

“I like how he talked about his personal experiences and how when he didn’t get a Grammy, when his career wasn’t where he wanted it to be and when he wasn’t getting the acting roles he wanted to get, how he got more confidence and stuck with it through the adversity,” Nelson said. “I think that is a good message for us to hear and one that will stay with me for a while.”

After the speech, Common met with students afterwards at a reception in the Women’s Building.

Johnson said that Common took the time to speak with every student at the reception and was gracious and professional.