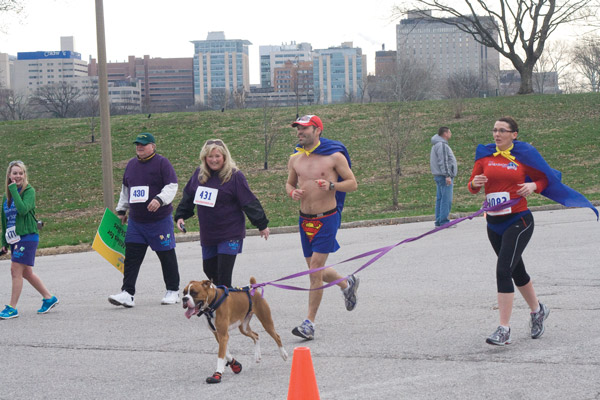 Members of the community participate in the Undy 5000 to promote awareness of colorectal cancer.

Some ran. Some walked. But almost everyone was wearing boxers, undies or brightly decorated shorts.

This was the peculiar sight that greeted passersby on Saturday morning in Forest Park, where the local Gateway chapter of the Colon Cancer Alliance (CCA) hosted its second annual St. Louis Undy 5000 (5K) event to promote awareness and raise money for the cause of colorectal cancer.

The CCA is the oldest and largest national organization that advocates for patients through patient support, public education, promoting early screening and funding colorectal cancer research.

Partnering with the Siteman Cancer Center at Barnes-Jewish Hospital and the Washington University School of Medicine, the Gateway chapter organized this year’s 5K with the goal of raising $100,000.

As of Friday, the organization’s Web site had reported an amount of $45,273.34 raised so far. Will this amount reach the chapter’s goal by the week’s end?

“We hope so,” said Victoria Anwuri, project manager of Siteman’s Program for the Elimination of Cancer Disparities. “Our goal is to best last year.”

Anwuri, who played a large role in coordinating this year’s efforts, also sits as vice chairperson on the board of the CCA Gateway chapter.

More participants were expected to register on the day of the race, and donations came from the event’s local and national sponsors as well, according to Anwuri.

Aside from Barnes-Jewish and the Washington University medical school, the Undy 5000 was also sponsored by Glacéau Vitaminwater.

“We’ve been working to plan the event for a good three to five months, but heavily for three months,” Anwuri said. “Part of that is creating a relationship with the Siteman Cancer Center to be a local sponsor for the event, which entails some soft money through media relations.”

Siteman sponsored the 5K at a bronze level equivalent to $12,000.

The event was also publicized through the center’s Web site as well as KSDK-TV Channel 5.

“Their sponsorship allows us to work with local media contacts to get the word out and also create awareness at the university level,” Anwuri said.

The cause drew a large crowd on Saturday. Despite the chilly morning, cars and participating teams packed the Upper Muny parking lot, where the race officially began.

The group was also an eclectic one, with serious runners, serious walkers, U.S. Marines, young children, fathers pushing strollers and dogs on leashes.

On stage, a lively announcer dressed in a cape chirped words of encouragement into a microphone throughout the entire race.

Navy-blue cotton boxers printed with the emblems of the CCA and sponsors came with registration, but most teams decided to design shorts and special attire of their own. Some sported brightly decorated team gear, Hawaiian shirts or superhero capes. Even some dogs showed up in team boxers, though perhaps not by their choice.

“It’s just a wonderful event to raise awareness about colon cancer, because there is a perception that colon cancer only affects people at a later age,” said Alissa White, a Gateway chapter board member who is in charge of education and outreach.

White, who is a colon cancer survivor herself, said the organization hopes the 5K will promote preventive screening and support research so that more patients can avoid the suffering brought on by the cancer and its treatment process.

Anwuri echoed White’s comment and stressed the importance of raising awareness about colon cancer as a community issue.

“There are many disparities with colon cancer in mortality and death rates,” she said. “Through this effort, we hope to encourage people to be screened, promote research and other programs to support colon cancer patients.”

“We were really shocked about that, especially with the weather last year,” Anwuri said. It was rainy and cold, but people still came out.”

Proceeds from the Undy 5000 will go toward funding local education, research efforts and screening programs.

Colorectal cancer is one of the leading causes of cancer-related deaths in the U.S., according to the American Cancer Society. Early diagnosis of colorectal cancer, however, often brings patients to a complete recovery.