Dozens of students and local community members pitched tents and camped out in downtown St. Louis Wednesday night to kick off a series of demonstrations aimed at rallying the community to stand up against corporate power.

The People’s Settlement is a five-day event in which participants camp out at Poelker Park at night and participate in demonstrations during the day on issues ranging from LBGT rights to environmental ethics.

This series of demonstrations draws from a variety of local activism groups and fosters a collaborative effort to combat what participants identify as “frustrations with corporate control of politics.”

Around 20 organizations are involved in the demonstrations, and hundreds of people are expected to attend throughout the five days.

Some of the participating activist groups include Missourians Organizing for Reform and Empowerment (MORE), Climate Action St. Louis, Washington University Co-Op and the Catholic Action Network. 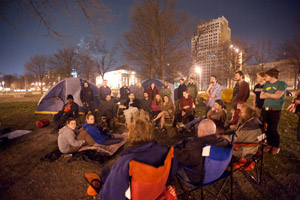 Students and community members camp out at Poelker Park as a part of a five-day event filled with protests targeted at corporate power and influence.

Anyone is allowed to attend any of the events.

There will be free food and some forms of entertainment each night.

Sophomore Deanna Parrish said she decided to attend the nightly planning meeting on Wednesday because she was interested in activism in the St. Louis community.

“I am interested as to how the few mobilizers on campus have been interested in expanding outward into the city and city movements and what [activism] is like outside of campus,” Parrish said.

Sophomore Mariana Oliver had never participated in an activism event before and was encouraged by Naomi Klein—an activist known for her criticism of corporate globalization who spoke on campus Wednesday afternoon—to become involved.

“I have never been part of an activism movement before, this is my first time and I figured it’s an awesome way to start it,” Oliver said.

The People’s Settlement started with a sit-in at Bank of America to protest the recent foreclosures. Protesters chanted in the lobby and demanded that an executive come down and speak with two customers whose homes were being foreclosed.

MORE Organizer Hannah Allison said the event was successful and the bank’s national office agreed to send someone from Washington, D.C., to St. Louis to meet with people and explain their practices.

On Thursday morning approximately 35 people protested outside Laclede Gas Company’s office on Olive Street to speak out against the company’s LGBT policies.

According to a survey conducted by the Human Rights Campaign, Laclede Gas tied with Exxon Mobile in 2009 as the worst company in the nation for gay, lesbian, bisexual or transgender people to work for.

On Friday the demonstrations will continue with a protest against Peabody Coal—the world’s largest private-sector coal company.

According to participants, it is important for people to be engaged with the community because St. Louis is the home to many major corporations. Demonstrators said that these companies feel they can get away with unethical practices because there is not yet a strong movement in St. Louis that will stand up against them.

“[Students] are in this city and we are purchasing customers of these companies in this city,” sophomore Arielle Klagsbrun said. “A lot of people don’t know that St. Louis is the hub of corporations who do a lot of not-so-awesome things.”

The People’s Settlement schedule of events: