Health care reform and you

We present a breakdown of the passage of the extensive health care bill which will bring coverage to millions of uninsured people and will most directly affect students by allowing them to remain on their guardians’ health insurance policy until 26. 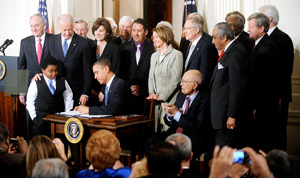 After almost a year of negotiations, argumentation and lobbying, the House of Representatives approved a drastic overhaul of the nation’s health care system, with President Obama signing it into law Tuesday. In a 219-to-212 vote, the House passed the legislation that the Senate passed in December. In addition, the House passed a package of changes as part of a budget reconciliation bill by a vote of 220 to 211.

1. The bill will require most citizens of the United States to have health insurance.

2. It is expected to bring coverage to 32 million people who currently are not covered under a health insurance plan.

3. The health care bill is also going to add 16 million people to the current population covered under Medicaid.

4. Private coverage is going to be subsidized for people who have low and middle incomes.

5. Many employers will be required to present employees with health coverage under penalty of a fine.

6. Insurers are required to allow children to remain beneficiaries on their guardians’ health insurance policies until the age of 26.

Throughout the day Sunday, while the House held a lengthy debate over the bill, protesters gathered outside of the Capitol Building and chanted “Kill the bill” and “Don’t tread on me.”

The House Democratic leadership gained the necessary votes for the legislation only hours prior to the scheduled vote. Obtaining the votes required leadership to broker a deal with Democratic opponents of abortion by promising that Obama would issue an executive order declaring that federal funds provided by the bill would not be used for abortions.

The reconciliation bill is set to go to the Senate. The bill is aimed at altering the Senate bill that passed the House on Sunday and was signed into law by President Obama on Tuesday.

The process by which the Democratic leadership in the House went about passing the bill has drawn criticism from opponents of the bill.

“People are complaining, but it seems to me the Democrats are doing it [using special reconciliation procedure] now, but the Republicans were doing it when they had control,” law professor Cheryl Block said. “I think it’s a procedure that they tended to use at the budget stage, but now its gotten overused. But you can’t point fingers, because both sides have done it.”

The overhaul will require most citizens of the United States to have health insurance. It is expected to extend coverage to 32 million people who currently have none. But analysts currently suggest that 23 million people will remain uninsured.

The health care bill is also going to add 16 million people to Medicaid. Additionally, private coverage is going to be subsidized for people who have low and moderate incomes.

According to the Congressional Budget Office (CBO), the bill will cost the government $938 billion over 10 years.

Under the terms of the legislation, many employers would be required to present employees with health coverage under penalty of a fine. Additionally, each state would set up a market-based exchange in which citizens without coverage could shop around for insurance.

According to the CBO, the costs of the program will be alleviated by Medicare savings and newly created taxes, including one on investment income. Despite the reform’s costs, it is expected to reduce the deficit by $143 billion in the next 10 years.

One of the most controversial parts of the bill was one that prevented health insurers from denying coverage to children with medical issues or ceasing coverage for people who become ill.

The bill also has benefits for students. Under the health care bill, insurers are required to allow children to remain beneficiaries on their guardians’ health insurance policies until the age of 26.

“The most immediate and obvious [way the bill affects students] is that students will be able to remain on their parents’ health care policies through age 26, which allows them to get into and maybe through grad school and into a job with a small business that lacks a health care plan or simply ride through a transition period where it’s difficult to get employee-based health care by remaining on a parent’s plan,” Smith said.

Smith noted that the bill would lead to increased costs in the future for students, while leading to increased access to adequate care.

The reconciliation bill that the House passed also contains provisions to revamp the federal student loan program and get rid of the fee paid to banks that serve the role of intermediaries. The federal government instead will enlarge a direct lending program that would save $61 billion over 10 years. The money would then be used to increase Pell Grants.

The maximum Pell Grant is scheduled to rise to $5,975 within seven years from the current $5,350. The initiative also provides $13.5 billion to cover deficits resulting from the rise in the number of Americans attending college.

The bill will allocate $36 billion more to Pell Grants over the next two years.

With additional reporting by Lauren Olens 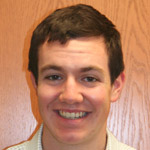 I am kind of worried about how everything is going to be paid for, but I am also anxious to see all the good that can happen as a result of it. While a lot of people will be insured who weren’t before, I am nervous how it will be paid for. 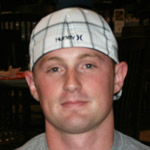 I feel like something needed to be done, but the fact that it was passed by such a narrow margin makes me uncomfortable. Something that important I think should have to be passed by more than just a simple majority.