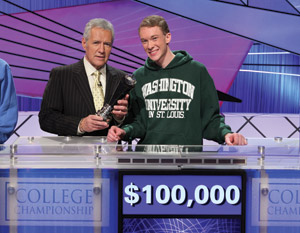 Junior Nick Yozamp receives the “Jeopardy!” championship trophy from Alex Trebek after winning the $100,000 grand prize. His win brought attention to Wash. U., albeit temporarily. (Courtesy of ‘Jeopardy!’ Productions Inc.)

Tired of blank stares, desperate explanations and awkward silence when you tell others that you go to Washington University in St. Louis? Junior Nick Yozamp may be able to help.

Since Yozamp defeated contestants from across the nation and won the championship of the college tournament on “Jeopardy!” on Feb. 10, he has been busy being interviewed by newspapers and TV shows.

While Yozamp has seen attention primarily from more mainstream media outlets, his triumph has also inspired discussions on blogs and forums online.

One of the notable forums that has caught the Yozamp frenzy is www.collegeconfidential.com, a Web site on which students, parents and educators exchange questions, answers and experiences regarding anything related to college, from college applications to college life.

As of mid-March, a quick Google search on “Yozamp Jeopardy WUSTL” yielded more than 1,800 hits.

In response to this sudden rush of fame, Yozamp has his reservations.

“I’m kind of a quiet guy, so the publicity I’ve been getting is not my cup of tea,” Yozamp said. “It has been flattering, though…I’m just glad that the initial rush of publicity has quieted down.”

While the number of phone calls and requests for interviews may have died down, how the fame and glory that he has attracted in the media affect the University’s publicity remains an interesting question that is being investigated.

The Office of Public Affairs was one of the first to probe into this question.

“We did a Google news search on this [win] after the show aired,” said Neil Schoenherr, associate editor of The Record in the Office of Public Affairs. “The story got a few dozen hits here in St. Louis and in Minnesota, where Nick is from.”

When the same search was repeated in mid-March, however, only one hit appeared because more time has passed since the show.

To account for this phenomenon, some point out that while there are numerous reports on Yozamp’s success, a one-time event does not necessarily leave lasting impacts on the University’s national visibility.

“Even when we host presidential debates, the visibility and publicity that we garner from such an effort is rather fleeting,” he said.

What truly affects the University’s long-term publicity, Givens added, is the intellectual capital of the institution—the research, knowledge and expertise that the faculty, researchers and students of the Danforth Campus and the Medical Campus embody.

The question of publicity is especially sensitive and pertinent to the many students who feel that the University lacks the name recognition of other institutions of similar academic caliber.

“I think Wash. U. could do more to increase the public perception of Wash. U. because many people have never heard of the school before,” freshman Adam Tsao said. “For those who are more academically inclined, they think Wash. U. is a great school, but for those who aren’t so involved in their academics, they have no clue.”

Despite the reservations about how a one-time event can affect an institution’s reputation as a whole, Yozamp remains optimistic and hopes that his story will introduce Washington University to some prospective students and families for the first time.