A comparison of the current course listings in WebSTAC with Joshua Gross' creation at woocourses.com.

Junior Joshua Gross was dissatisfied with Washington University’s online course catalog and decided to create WashUCourses.com. The only problem was the University trademark on “Wash. U.” and other variations of the University’s name.

Gross changed the Web site’s URL to woocourses.com, after Patricia Hart, the associate general counsel of Washington University, sent a cease-and-desist letter on Feb. 18. The letter cited possible confusion that the “Wash. U.” designation might cause.

“Your use of the ‘Wash. U.’ trademark in this context causes confusion as to the sponsorship of your Web site’s services by implying to consumers (students) that the University is somehow affiliated with, or approves of your services,” Hart wrote in her letter to Gross. “Such consumer confusion regarding affiliation or approval constitutes trademark infringement and unfair competition under Missouri state law and federal law.” 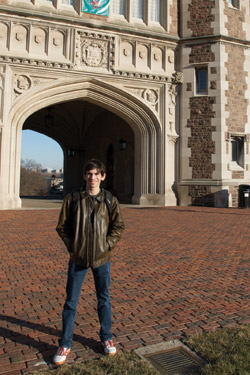 “I have been using the course Web site for the past two years, and I’ve always been dissatisfied,” Gross said. “You have to fill out certain credits, but you can never search by these requirements, so I wanted to create a way that students can search by requirements that they need.”

Gross’ site allows students to search not only by basic requirements, but also by length of class, frequency, instructor, room, number of credits, course title and course description, and by whether the course has a subsection or whether the course needs prerequisites. Students can also comment on courses.

Gross has received positive feedback from students inside and outside the art school. Students, he said, have complimented him on expanding the information already available on the course catalog.

“I try to make the information as clearly presented as possible and add the ability to search by a wider variety [of criteria],” Gross said.

Sophomore Melissa Cochran is one student who views Gross’ site positively. “I like woocourses.com more than WebSTAC’s course listings because it is more helpful and user friendly,” Cochran said.

Cochran also complimented woocourses.com’s color coding and the ease of searching for classes.

According to Gross, he had received prior warnings about Wash. U. Courses “a solid seven days, possibly more” before he received the cease-and-desist letter. He had not spoken to Hart prior to receiving the letter. Gross did not believe that he was violating any trademark laws.

“From my own research of the law and of trademarks, they did not own a trademark on ‘Wash. U.’ in the context of Web sites and searchable databases, so I thought I was in the clear,” Gross said.

While Gross willingly changed the Web site’s name to “WooCourses,” he said he believed that the University could have handled the legal matter better than it did.

Gross plans to continue running the Web site independently of the University, but he noted that if the University is willing to have an open dialogue with him, he will think about collaborating with them to improve Wash. U.’s catalog.

“I said that I would be willing to talk to the school about getting official support, since other students have told me that they want more support from the Web site,” Gross said. “I thought the school and I could work together on this.”

Despite the legal disputes he has faced, Gross emphasized that his main goal for WooCourses has remained the same.

“I want people to find classes they want more quickly, instead of browsing through the course catalog for a few hours,” Gross said.