An in-depth look at the plans of Ralph Quatrano, the new dean of the School of Engineering who will assume the role of dean designate on March 1 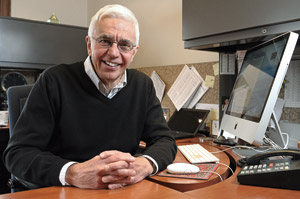 Ralph Quatrano, former interim dean of the College of Arts & Sciences and former chair of the biology department, was selected as the new dean of the engineering school. (Christopher Lo | Student Life)

He was a seemingly unlikely choice. A professor with no formal engineering background, Ralph Quatrano was selected as the new dean of the engineering school—a school with five distinct departments.

But Quatrano—former interim dean of the College of Arts & Sciences and former chair of the biology department—said that his unique background would help integrate interdisciplinary studies within the engineering school.

“I am a strong believer in interdisciplinary kind of work, so for me, I want to go over barriers,” Quatrano said. “I want to be able to facilitate and encourage and nurture interaction at the interfaces of what appears to be diverse disciplines, diverse cultures.”

Quatrano, a biologist, admitted that he is unfamiliar with many aspects of the engineering school, but said he faced similar challenges when he became dean of Arts & Sciences.

“I will be the first to say that I am not an engineer,” Quatrano said. “I have a big steep learning curve [in regards to] mechanical, civil and electrical engineering.”

Quatrano begins his tenure as dean designate starting March 1, 2010, serving a four-month transition period. His tenure will officially begin in July. He succeeds Senior Professor of Biomedical Engineering Salvatore Sutera, who has served as the interim dean of the School of Engineering & Applied Science since July 1, 2008.

The appointment comes two years after the former dean of the engineering school, Mary Sansalone, resigned from her post amid controversy. Throughout her less than two years as dean, Sansalone came under fire for several significant changes, including the merging of several departments and budget cuts in response to the school’s financial situation.

The search for a permanent engineering dean started in December 2009 when Provost Edward Macias encouraged faculty members to submit applications and nominations.

The University only conducted an internal search for the new dean.

Macias said that hiring a non-engineer to head up the school is not unprecedented, and that Quatrano’s diverse experience brings a lot to the engineering school.

“He’s an outstanding scientist and is very familiar with broad areas of science,” Macias said. “He’s been an excellent leader as a department chair both here and before he came here.”

“One of the reasons why I was approached is because I was already interacting with so many people in engineering,” he said.

Given Quatrano’s biology background, some have speculated that his appointment signifies an increasing emphasis on biomedical engineering.

Ranked 10th in the nation, biomedical engineering is the highest-ranked department in the engineering school, according to the U.S. News & World Report rankings.

Quatrano said his appointment is not indicative of any University agenda. He plans to be upfront and learn about disciplines he is less familiar with such as mechanical and electrical engineering.

Quatrano has also committed to carrying out the engineering school’s strategic plan– the “Plan for Excellence” that Sansalone set forth in 2007 under the direction of the administration. The plan is part of the University-wide strategic plan.

The plan seeks to develop cross-school initiatives and modernize the engineering school by reorganizing departments. Most notably, the plan eliminated the aerospace and civil engineering majors. The plan also includes the construction of three new buildings for a combined total space of 500,000 square feet. The first phase of consutrction will be completed in the fall of 2010 with the opening of Brauer Hall.

Sansalone came under fire for inadequate communication as she implemented the plan.

Faculty members within various departments noted the multi-disciplinary nature of the engineering school and viewed Quatrano’s leadership and professional background as an opportunity to build new bridges within the school.

Pratim Biswas, chair of the Energy, Environmental & Chemical Engineering Department, said Quatrano has worked on environmental initiatives with the department in the past.

“He’s very interested in areas such as bio-energy and is concerned with environmental issues, and wants to see it thrive here at Washington University,” Biswas said. “He will be quite knowledgeable and will help us move ahead at full speed.”

Biomedical engineering professor Larry Taber said that there could not have been a better choice than Quatrano at this time.

“I think he brings much needed fresh blood,” Taber said. “It will help us strengthen our ties with the Department of Biology.”

The engineering school has come under criticism in the past for not having tenured and tenure-track faculty from any underrepresented minority.

According to the “Report on Trends in Faculty Diversity: Washington University Danforth Campus,” underrepresented minorities include blacks, Native Americans and Hispanics.

Quatrano said that he will follow the lead of the provost and make diversifying the faculty a priority in his agenda.

“I think that [diversifying the faculty] is probably the number one awareness that I have in searching for any position—diversity and competence,” Quatrano said. “I feel strongly that we must pay attention to diversity, and diversity at all levels, from age to race to everything.”

Quatrano said it will be hard to hire new faculty amid the tough economic climate, but added that the engineering school will continue to hire new people and must look for new faculty members to better the school’s reputation.

Even though the school is under a staff freeze, the school can still hire new faculty as long as it maintains the same net number of faculty members. When a faculty member retires or leaves the school, another person can be hired in his or her place.

“Every school has economic problems now, and I think it is really important to show that we are moving ahead,” Quatrano said. “I think its important to let everyone in the country know that we are searching, we are active, whereas other universities are not only not searching but pulling back on offers already made.”

Quatrano cited the engineering school’s ranking as one of the school’s greatest weaknesses.

The School of Engineering & Applied Science is ranked 46th on the U.S. News & World Report list—the lowest of any of the schools at the University.

The key to improving the rankings in each school, Quatrano said, is research.

“If you look across the board in engineering, the infrastructure is there, there are really good people, but you need to really push ahead on the research,” Quatrano said.

Since grants are so competitive, receiving funding would help the University gain higher national recognition.

Quatrano said he would also emphasize peer review and would work to ensure that each faculty member can conduct research effectively.

“It’s not just a question of getting money, it’s peer review of your science—recognition by your peers in a scientific community about how good your science is, Quatrano said. “You need to make sure your top researches are happy, because you don’t want discourage them.”

Over the past year, the undergraduate student body has criticized the engineering school for accepting the term “clean coal” and receiving funding for further research into its viability as a form of energy production.

Quatrano noted that the engineering school would continue research clean coal and its uses, but that the research would not overshadow other forms of energy.

“We are not excluding other measures to enhance our energy production,” Quatrano said. “This [clean coal research] was an opportunity. We had expertise in house, and it was an opportunity to get the kind of research funding that would allow some of our faculty to develop this.”

Nevertheless, Quatrano emphasized that information on the University’s clean coal research must be transparent.

“As dean, I would say that since we have an opportunity to do clean coal, let’s make sure we do it right and that we state everything clearly and accurately by what we mean by ‘clean coal,’” he said.

Harry Alper, a junior who has been outspoken about the University’s use of the term ‘clean’ in reference to coal, said that as dean, Quatrano should listen to students’ concerns.

“He should listen closely to what the students are saying about the consortium, and should try to step back from the political ties if he can,” Alper said.

Senior Dan Brewster, president of EnCouncil—the student government for the engineering school—said that the members of EnCouncil have no qualms about Quatrano’s background and that the council looks forward to woking with him.

“If the [University] is confident that he is the right person for the job, then we stand behind him,” Brewster said. “We are excited to have Quatrano with us. We are looking for someone who is a big proponent of engineering, someone who thinks engineers can do big things, and someone who will work with us.”

“Students are obviously a big part of the school and I want to hear what they have to say,” Quatrano said. “I like people who are vocal, and I look forward to hearing [from them] in the future.”