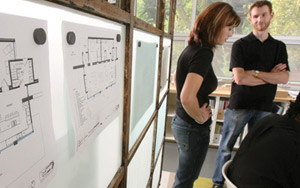 As Americans do their best to weather the economic storm, architects throughout the country are finding themselves losing their footholds.

Nationally, approximately 30 percent of architects are unemployed. According to statistics released by the American Institute of Architects for July 2008, architectural firms across the nation were employing a total of 224,000 people. By January 2009, that number had dropped to 206,000.

Architects are now facing reduced work hours and loss of benefits. Others have lost their jobs altogether. Those affected include not only recent graduates and junior members of design firms, but also mid-career and senior members of the architecture community.

The current struggle in the architecture profession is giving the students at the Sam Fox School of Design & Visual Arts something to ponder.

“I am planning to go on to graduate school for two years right after college, so I am hoping that by then I would have waited out this economic downturn,” said Sarah Miller, a sophomore architecture student.

The economic turmoil, Miller said, has not hindered her from striving to fulfill her dream of becoming an architect. But she admits that she is trying to branch out to give herself an edge over her peers when the time comes to send out graduate school or job applications.

“Even though I am primarily an architecture student, I am trying to get more diverse skills, such as gaining experiences in doing background landscape architecture,” she said. “Hopefully, this will make me more marketable and grant me more opportunities to graduate school and the job market.”

While students like Miller plan to cross their fingers and hope for the best, some who are already in the job market have been forced to abandon architecture in favor of more stable professions.

“This past summer I talked to quite a few past graduates from Wash. U. Sam Fox, and it was shocking that some of them had to completely switch to a different career track and give up architecture,” Miller said. “Although, there were various reasons as to why these people gave up the architecture profession, from what I heard the economy definitely played its role.”

Despite this, Miller believes that Washington University’s undergraduate architecture program prepares its students well enough to be very competitive in the architecture world.

“I wouldn’t have come here if I didn’t know that Wash. U. does an excellent job to produce successful architects,” Miller said. “Wash. U.’s architecture graduate school is very highly ranked in the country and that certainly reflects in its undergraduate program.”