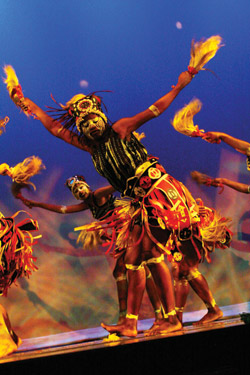 This year’s Africa Week will conclude with a performance on Friday and Saturday night of “Sundiata: King of Mali” by St. Louis-based Western African Dance Company Afriky Lolo. The African Students Association aims to expand students views of Africa beyond the stereotypes by exposing them to the rich culture. (Courtesy of Afriky Lolo)

The African Students Association wants to show the Washington University campus that there is a lot more to Africa than the stereotypes and myths that many students believe.

This year’s Africa Week, taking place this week, is titled “Myths and Legends.”

The main event will be at 8 p.m. on Friday and Saturday at Edison Theatre, where the West African dance company Afriky Lolo will present “Sundiata: The King of Mali.” Through dance, storytelling and drumming, this performance will explain the legend of Sundiata, who was the founder of the Malian empire in 1235 C.E. Though Sundiata was physically handicapped, he was able to build an extensive empire.

Ife Salako, president of the group (ASA), is especially excited about this event because it spotlights African cultures.

The week’s events will begin at Ursa’s Stageside on Monday with an event titled “The Warmth of the Human Voice,” where WU-SLam, WUStyle and other performance groups will have presentations.

Africa Week will continue Tuesday with a roundtable about the misconceptions about Africa and African identity in the Western media.

“Tuesday we’re going to be talking about the African identity and how a lot of Africans come off to people in society, but there’s so much behind the culture and continent itself,” Salako said.

ASA hopes to connect students at Wash. U. to the African cultures that many rarely experience.

“By discussing identity and how people relate to each other, it’s a way of humanizing Africa and making a personal connection where people can look at it from a different point of view,” Vice President of ASA Betel Ezaz said.

Salako mentioned that these questions about identity apply to cultures worldwide and not just to Africa.

The Feast for Legends will take place on Wednesday. Local restaurants will provide African food. In addition, ASA will screen the documentary “Throw Down Your Heart.” The film traces banjo player Béla Fleck’s trip through Africa and uses music to break through misconceptions that people have about Africa.

A fashion show will put African fashions and jewelry on display Thursday.

These events may be the only opportunity many students have to learn about Africa in this depth, ASA members said.

“I want [students] to take the events as an opportunity to get one step out of the comfort zone or to learn something that you won’t get to experience in classes,” Salako said.

ASA wants people to learn more about Africa than what they see in the media.

“It’s an education too, because some people might leave here without ever having been challenged in what they think about Africa in a different sense than what they see constantly in the news,” Ezaz said.

Salako hopes that students will learn from the events and leave with different visions on the African continent and people.

“These are things that we associate as being part of our home and culture…This is our way of life, so I definitely expect people to come with an open mind, and I hope they take something from it and not just leave it as they found it,” Salako said. “When they’re leaving the fashion show, [I hope] that they understand that fashion doesn’t stop in the western world, and there’s amazing beautiful people in fashion all over the continent in Africa, and it extends beyond our borders.”

Ezaz agrees with Salako in that she too hopes many students learn more about the realities of Africa this week.

“The main thing is kind of showing a different view of Africa other than the one we see of AIDS and starving children, because while that is definitely there, that’s not what defines Africa as a whole…In general, Africans are just very happy people and have a very rich culture—and there’s not just one culture, but it’s how they come together,” Ezaz said.

Specifically, Ezaz hopes that the generalizations and myths about Africa can be broken.

“I guess on a personal level, you get really bothered when you’re in a class or when you read something and it generalized an entire continent, because when you know something is not true or is not the whole…truth, it makes you want to prove that there’s more,” Ezaz said.