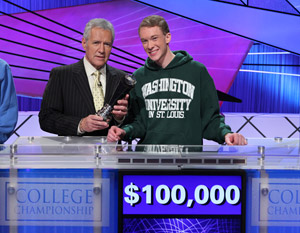 Washington University students and faculty alike have been captivated by Wash. U. student Nick Yozamp’s appearances on the popular televised game show “Jeopardy!” So when the final game was shown in the DUC Commons, everyone held their breath, rooting for the Wash. U.’s knight in school-spirited sweatshirt armor.

Yozamp pulled through, winning the $100,000 grand prize and some positive attention for the University. Ryan Stoffers, a sophomore at University of California, Los Angeles, finished second in the competition, winning $50,000. Surya Sabhapathy, a senior at University of Michigan, won $26,600 for finishing third.

“I was surprised that so many people showed up for the viewing, and with each correct response people were cheering and everything,” Yozamp said of the DUC viewing, immediately after winning. He was showered in confetti and hoisted upon student’s shoulders, as a brief chant of “Nick, Nick, Nick” filled the air.

“It was really electric all throughout the DUC,” junior Alex Christensen said. “There were a lot of people here, and we were cheering for every answer that he got right.”

Though Yozamp got the Final “Jeopardy!” question wrong, he planned his wager so that he won anyway. 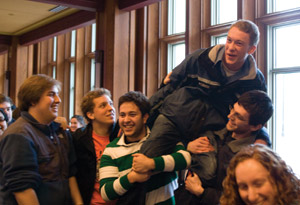 “It was hard when the Final “Jeopardy!” answer was revealed and I was incorrect,” Yozamp said. “I’m like ‘Oh, I’m going to be so embarrassed,’ but the redeeming quality was that I did win in the end, so it wasn’t too bad.”

Both Stoffers and Sabhapathy correctly answered the Final “Jeopardy!” question: “These two men first meet in 1 Samuel 16 when one becomes aware of the musical talent of the other.” The correct response was “Who are Saul and David?” Yozamp responded “Who are Ramses and David?” but retained more than $10,000, which was added to his $20,000 total from Thursday’s episode.

Yozamp was in the audience at the DUC, unbeknownst to many students.

“I didn’t realize he was sitting here until the final question,” sophomore Bernell Nevil said. “He was right there. He knew if he won or not. It was definitely exciting. It will help people know we’re in St. Louis, and not Seattle or D.C.”

College “Jeopardy!” differs from normal “Jeopardy!” not only in the contestants’ ages, but in the attitude they bring with them to the game.

“Often in our regular games a player sees their score and imagines what bills could be paid with the money,” Maggie Speak, the show’s contestant producer, wrote in an e-mail to Student Life. “Although I’m sure a lot of our students could use the money for college loans, etc., they seem to really understand that this is a game and they tend to play it more for fun than cash.”

Yozamp plans to spend part of his winnings on his study abroad program in France this summer. The rest will help him pay for medical school.

Still, for Yozamp there is more to playing than money.

“The best part about “Jeopardy!” is not the money nor is it the recognition,” Yozamp wrote in an e-mail to Student Life. “The best part is the game itself. Playing the game in the studio is exponentially more fun than playing “Jeopardy!” at home. The most difficult aspect of the experience is not having been able to tell anyone how I did on the show.”