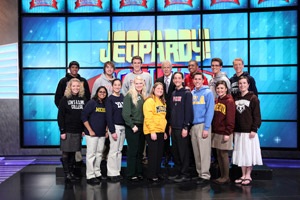 Turn your television on at 3:30 p.m. on Thursday and Friday to watch Nick Yozamp, junior at Washington University, participate in the “Jeopardy!” College Championship finals.

Yozamp advanced after Monday’s episode in which he overcame a $5,200 deficit to win the game.

Yozamp has been competing in “Jeopardy!” College Championship this past week. After advancing from the Feb. 4 quarterfinal round against Dan D’Addario from Columbia University and Surya Sabhapathy from University of Michigan, Yozamp participated in the semifinals on Feb. 8. Yozamp then competed against Sami Missaghi from University of Minnesota and James Hill III from Santa Clara University.

At the beginning of College Week, each player appeared in one of the five episodes. The victors in each of the episodes went on to the semifinals taking place this week, along with the next four-highest money earners. The nine semifinalists then competed in three episodes for a position in the two- game finals match. The final rounds will air Thursday and Friday.

Yozamp is a 20-year old biology major at Wash. U., planning to go to medical school after graduating.

Three other students have represented the University on “Jeopardy!” including quarterfinalist Ericka Hayes in 1993, semifinalist Arianna Hunt in 2002, and second-place runner-up Jayanth Iyengar in 2006.

Participants in this year’s “Jeopardy!” College Championship include students of varying ages from universities across the country. According to a press release issued by “Jeopardy!”, since 1989, more than 160 colleges and universities have been represented in the tournament, which has awarded $3 million in cash prizes to the participating students.