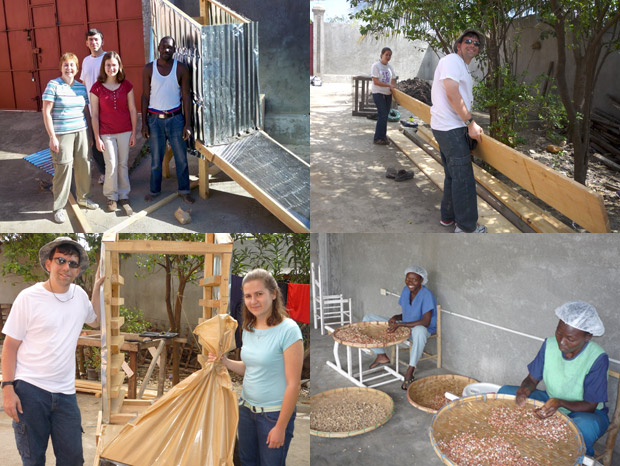 Students and a professor work with locals helping out in Haiti on behalf of Engineers Without Borders during spring break in 2009. (Courtesy of Robin Shephard (top-left) and Will Fischer)

As national fundraisers for Haiti include everything from texting donations to celebrity-sponsored telethons, Washington University’s Engineers Without Borders continues to pursue long-term efforts to tackle poverty in the country.

Even before the earthquake struck on Jan. 12 near the capital city of Port-au-Prince, Haiti was considered the poorest country in the Western Hemisphere. The 7.0 magnitude earthquake has killed more than 200,000 people in the nation to date. According to The New York Times, relief efforts in the United States for Haiti have raised about $560 million.

“[The country] suffers from so many ills: environmental degradation, corrupt government, inadequate education, crippling malnutrition [and] no reliable infrastructure for transporting goods into the country or obtaining power,” said Jamie Cummings, a member of Engineers Without Borders (EWB).

The University’s chapter of EWB partnered with Meds and Food for Kids (MFK), hoping to address these issues.

MFK, headed by Patricia Wolff, pediatrician at the Washington University Medical School, provides treatment for 2,000 to 3,000 malnourished children in Haiti with the Ready-to-Use Therapeutic Food (RUTF) or Medika Mamba. This peanut butter product is a home-based treatment administered over six to eight weeks to alleviate malnutrition in children. RUTF used in Haiti is produced within a local factory headed by MFK.

French pediatrician André Briend had developed the formula, which is now used by worldwide organization Project Peanut Butter to treat hundreds of thousands of malnourishment cases. During field-testing, Mark Manary, a University professor of pediatrics, used the formula to treat malnourished children in Malawi.

In Haiti, MFK’s factory purchases as many peanuts as possible from local farmers and employs about 30 Haitians. According to senior Will Fischer, president of EWB, the student group hopes to help the factory increase the efficiency of the creation process. One issue EWB hopes to address is the difficulty farmers face in growing peanuts due to the region’s rainy seasons and climate.

“It’s really risky for a farmer to lay out peanuts on their fields unless it’s dry,” Fischer said. “Normally they have to get rid of 40 percent of the peanuts that they harvested.”

The solar peanut dryer would reduce peanut mold growth, and farmers would easily be able to introduce the machine into their farms. The dryer is also planned to be affordable for Haitian farmers.

Other plans include creating a process to make charcoal from waste peanut shells. According to Cummings, peanut shells are currently thrown away into nearby rivers after productions. With the new method, these peanut shells would be carbonized and pressed into briquettes.

“Once we fine-tune the process, we hope to distribute the technology to Haitians in the area, so that they can start up their own charcoal-making businesses, using waste biomass, while also decreasing the demand for wood,” she said.

Members from EWB traveled to Haiti in spring 2009. Students built the solar peanut dryer and tested the prototype in the summer. EWB plans to travel to Haiti in summer 2010 to continue its work with MFK.

“The saving of Haiti will come from long-term, smart investments in Haiti,” Cummings wrote. “Like that made by Meds and Food for Kids: building Haiti’s economy, employing its people and in general empowering its people to solve their own problems.”

At the time of the earthquake, more than a million families had already depended on international food aid to survive. Previous deforestation and soil erosion have resulted in severely depleted resources and even more disastrous effects from hurricanes and other storms.

“Haiti was in a desperate situation before the earthquake,” Cummings said. “The average Haitian lives on $2 a day.”