Last Thursday, Yozamp appeared on “Jeopardy! College Championship” on NBC, beating out representatives from other universities in the quarterfinal round.

Although he was second going into Final Jeopardy!, he correctly answered the question of who appeared on the cover of the 1946 Time magazine with the caption “All Matter is Speed and Flame.” 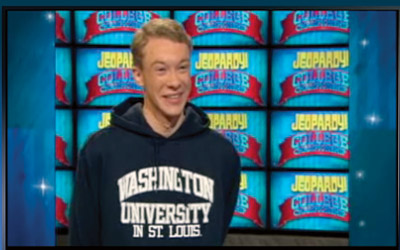 The correct answer, Albert Einstein, brought him to the lead and enabled him to win with a score of $20,000, beating the other two contestants: Surya Sabhapathy of University of Michigan and Dan D’Addario of Columbia University.

When looking back at the competition, Yozamp remembered the intensity of the game.

“The quarterfinal episode that I competed in was very competitive,” he said. “We were all pretty evenly matched. It was a really good game on all fronts.”

Having won the quarterfinal game, Yozamp is guaranteed winnings of $5,000, and will move onto the semifinal round to compete for the $100,000 prize guaranteed for the winner of the tournament.

Yozamp’s passion for “Jeopardy!” began when he started watching the show at around the age of 6 at his grandparents’ house. He was so captivated by the game that he asked for a “Jeopardy!” computer game for Christmas when he was 8.

Although correct answers were few and far between when he first began practicing the game, he continued playing, regularly watching the show and participating in Knowledge Bowl throughout middle and high school.

Gradually, he built up that encyclopedic knowledge and quiz-game acumen that would later carry him onto the very show itself.

Last August, Yozamp took a 50-question online diagnostic test offered by “Jeopardy!” and began his journey to the podium. After that performance, Yozamp was invited to an audition in Chicago in October.

After taking another 50-question test, playing a mock “Jeopardy!” game and being interviewed by the contestant coordinators, he was notified in December that he qualified to compete in the quarterfinal game.

Saying that Yozamp was excited would be an understatement.

“Since late high school or early college, it has been my ultimate goal in life to be on ‘Jeopardy!’—that was the main thing I wanted to do,” Yozamp said. “I’m just surprised that it happened so quickly.”

Yozamp said he enjoys every part of the game.

“I like the trivia aspect of it, learning knowledge in a lot of different fields,” he said. “What really appeals to me is just the breadth of the information on the show…The competitive aspect is also really fun. Everything about it is just really cool.”

Unsurprisingly, Yozamp’s family and friends are very proud of his accomplishment and are supportive in his trivia-related strives.

“I think that winning his quarterfinal game was an amazing feat,” said junior Alyssa Moller, Yozamp’s friend. “I am very excited to tune in on Monday for his semifinal game and see if he advances to the finals. Go Nick!”

While Yozamp is proud of his accomplishment, he also believes that others can do it as well. His advice to other “Jeopardy!” aspirants: “Keep at it—take the online tests when they are offered. Who knows, maybe you will do well enough, make it to the auditions and make it on ‘Jeopardy!’ If I can do it, other people can do it too.”

The next online “Jeopardy!” test for college students will be offered at 8 p.m. on Tuesday. Interested students can go to www.jeopardy.com, make an account and register for the test.

In addition to Yozamp, three other students have also represented Washington University in prior competitions on “Jeopardy!”: quarterfinalist Ericka Hayes in 1993, semifinalist Arianna Haut in 2002, and second runner-up Jayanth Iyengar in 2006.