Students weigh in on the new iPad 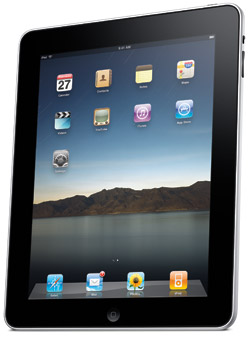 The Apple iPad, a tablet computer announced on Jan. 27, 2010, will have versions released later this year in March and April. (Courtesy of Apple)

Features of the new device include Web browsing, picture viewing, gaming and support for e-books. Almost all of the current iPhone applications will work on the device. It weighs 1.5 pounds and is half an inch thick. Prices for the device are set to start at $499 and will increase based on memory size and optional 3G service.

“iPad is our most advanced technology in a magical and revolutionary device at an unbelievable price,” Apple chairman and CEO Steve Jobs said when he unveiled the product.

On the Wash. U. campus, student reactions to the iPad are varied. Many students think that the iPad is redundant technology, given its similarities to Apple’s iPod Touch and traditional laptops.

“I already have an iTouch, and I don’t feel like I need any of stuff that it [the iPad] has,” freshman Christine Lang said.

Freshman Tiffany Kang agrees: “I think it [is] kind of pointless because there are already too many gadgets out there. It has the same functions as a laptop, which I would rather buy. There’s no extra benefit over having an iPod. I would find it extraneous to have one.”

Price is also a factor that plays a role in whether or not students would consider buying the device. Most students are not willing to splurge on the iPad when it is so comparable to devices that they already own.

“I am perfectly happy with my iPod Nano,” sophomore Brendan Cook said. “Five hundred dollars is way too much for something that is so similar to what I already have. If they added a bunch of new features I would probably consider getting it.”

Laura Yu, a sophomore, said, “They look interesting, but I would never buy one because I feel like I could do the same stuff on a MacBook and don’t need to buy one.”

Junior Nick May said the iPad “seems like a giant iTouch, but I haven’t really looked at it. I’m sure it has more stuff, and on the other hand I don’t think it could do everything a laptop could do. It’s the first generation. The next generation will have more capabilities.”

This sentiment is common on campus. Some students claim that they would be more likely to buy the iPad if it had greater capability.

“I would want to wait until they came out with a new edition to buy it,” senior Becky Bell said.

Some students feel more positive about the new Apple gadget.

“I want it because it’s new technology and it is interesting,” Bell said. “I feel like its function is to be hip and trendy.”

People have also found humor in the similarities the iPad shares with previous products.

“I already have a laptop and an iTouch, so I’ll just tape them together,” May said.

Apple also released a new kit for developing apps to run on the iPad. The Software Development Kit (SDK) allows developers to test apps on a Mac and program them to run on the iPhone, iPod Touch and iPad. There are currently more than 140,000 apps that run on Apple products.

The tablet computer will be sold starting in March. Storage capacities range from 16GB to 64GB.