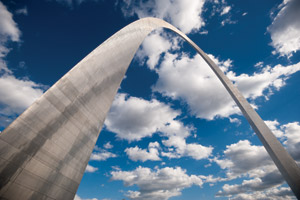 English professor Gerald Early was selected as a member of an eight-person jury charged with choosing a proposal to redesign the grounds surrounding the Gateway Arch. The facelift of the Arch grounds will be finished by 2015. (Matt Mitgang | Student Life)

In 2015, a newly designed modern park will showcase a St. Louis historic icon: the Gateway Arch. A 10-month international design competition that started in December 2009 will select a winning architectural design among portfolios submitted by professionals around the country and the world.

The competition, “Framing A Modern Masterpiece: The City + The Arch + The River,” encompasses the idea of “connecting the city, the Arch grounds, and the river, maintaining the Arch as an icon, [and] portraying the entire place as an iconic place,” according to the competition manager, Don Stastny, a prominent architect and urban designer and the CEO of Portland’s StastnyBrun Architects Inc.

In January, eight jurors of various specialties were selected, one of whom was a Washington University faculty member: Gerald Early, the Merle Kling Professor of Modern Letters and the director of the Center for the Humanities.

“We selected the jury [by looking at] the qualities that we want the designers to address within the competition,” Stastny said. “We look for people who aren’t just kind of singular but have multiple kinds of discipline. They also have to be the type of people who will collaborate…[and] have the highest personal integrity. Once they make a decision as a jury, that opinion will be respected and not turned over.”

Redesigning the Arch grounds had been an architectural project discussed for many years before becoming a reality.

“One of the things that had been talked about was redesigning the Arch grounds by 2004 [to commemorate the year 1904, when the World Fair had been held], but that never happened,” Early said. “This is a new initiative that’s being launched—[it has been] talked about probably for the last eight or nine years.”

The first step of the competition—a deadline for competition registration that included a letter of intent—has ended.

“In this first round, we will evaluate the qualifications; people have submitted their intention and their desire…The jury will look for teams who have shown prior work [that is] creative and viable,” said Alex Krieger, an urban designer who had been on the juries for a competition to redesign Pennsylvania Avenue in front of the White House as well as a Holocaust memorial in Boston.

According to Early, a winning team’s scheme will be selected this August.

To connect the city and the river is a unique project in and of itself and can be compared to a similar architectural design competition in Shanghai, Krieger said.

“In Shanghai, the competition was to take a three-mile area between the river and the historic part of the city…to bury the very wide road [separating] the city from the river, and then extend the park system to the river,” Krieger said. “The kind of impact of [the Arch competition] would be comparable to the transformation [in Shanghai].”

The jury will meet for the first time early next week and begin the selection process. According to Stastny, there has not been a budget for the competition in an effort to prevent limiting designs. But Krieger said the jury will make sure that “the winning scheme is viable to be realized and to continue to be realized in the near future.”

“It has to be somehow comparable to the Arch itself,” Krieger said. “It has to provide amenities to people using the park environment; it should diminish the barrier from downtown St. Louis and the river; [and] it should of course be beautiful when seen from the distance.”