Recruitment number up for sororities 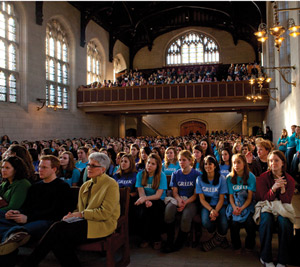 On unity day in Graham Chapel, on Jan. 17, all the sororities join with their new members to celebrate being Greek. (Whitney Curtis | Wustl Photo Services)

As January ushers in a new semester, each of the seven sorority chapters at Washington University also welcomed a new member class following a weeklong recruitment process.

This year, 311 women arrived on campus a week earlier than the rest of the student body to participate in formal recruitment.

According to Lucy Morlan, coordinator for chapter development in the Greek Life Office, 274 women were initiated into a sisterhood by the end of the week. Students who had to leave due to a family emergency or withdrew during the course of the week for other reasons accounted for the difference in numbers, along with a small percentage of those who did not receive a bid.

“[274] is certainly better than what we have done in a number of years in terms of taking everybody,” Morlan said. “Definitely a high number of women received bids this year as opposed to last year.”

The total number of women who originally registered for formal recruitment this year was 325 at its peak, which is also higher than average, according to Morlan.

“Usually we have around 300 people register for recruitment, and then we have 10 or 15 that can’t come back because of weather or they get sick,” Morlan said.

Morlan attributes the increase in interest partly to the entrance of Alpha Omicron Pi (AOII), the newest addition to the University’s Greek Life system.

“[AOII] definitely gave another option for people to go to. I do think it had an effect on the number of people increasing this year, because there was a different option and people were maybe a little bit more interested in that,” Morlan said.

According to senior Amanda Coppock, president of the Women’s Panhellenic Association, AOII boasted a positive and smooth experience with its first recruitment.

“It was a real success. They have an excellent new member class,” Coppock said.

Morlan echoed Coppock’s praise of AOII’s recruitment results, emphasizing the number of positive responses from both the chapter and its new members.

“With this being their first, they did extremely well with it,” Morlan said. “Everything we’ve heard from the women and the chapter has been an extremely positive experience. It was the first time they got to spend the entire week together. They really enjoyed it, and we were really happy to hear that.”

“We are working to shorten the days basically to make it convenient for everybody involved,” Morlan said. “In a bigger system like this, it helps the women get it through their mind and start thinking about, ‘This is what I want to focus on,’ instead of having two days of going to all of the chapters.This is a little bit more gradual and eases into the process of choosing which one they want.”

The change was implemented at the recommendation of the National Panhellenic Council. The new arrangement and the formal debut of AOII both contributed to the overall success of this year’s recruitment.

“This year definitely had a different feel,” Morlan said. “With AOII’s entrance, there was a real feeling between all the chapters and women of supporting them and working together. The attitude carried over the entire process, and we were constantly hearing that message of support. Everyone had a positive and amazing experience and it was a big relief to see that.”

Though the addition of a seventh chapter may have helped make the process smoother, Coppock still described the week as being “a little crazy, spirited, exciting and exhausting,” which is what the week has typically been known for.