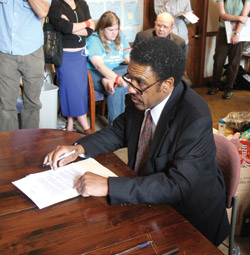 Dean of Arts & Sciences Jim McLeod sits down to negotiate with the Student Worker Alliance during the group’s sit-in at the admissions office in April 2005. (Student Life Archives)

Senior Class President Fernando Cutz announced Wednesday night that the  Class of 2010 would donate all funds raised through the senior class gift drive to the McLeod Scholars Program. The scholarship commemorates dean Jim McLeod, who has taken a leave of absence to undergo cancer treatment.

Eligibility for the scholarship will be based on a combination of qualities McLeod, dean of the College of Arts & Sciences, has valued most: leadership, academic achievement, commitment to serving others and integrity. The student must always be striving for excellence, just as McLeod has insisted on excellence in the undergraduate experience.

The scholarship will be available for incoming freshmen in the Class of 2014.

Dean McLeod has long been a strong force on campus and in shaping undergraduate life at Washington University.

“He is the individual who has the vision, the wisdom to paint the picture of what a quality undergraduate experience should look like,” said Jill Carnaghi, associate vice chancellor for students and dean of campus life. “He’s part and parcel of the fabric of this institution.”

McLeod’s enthusiasm for student life has been recognized by students for years.

“Dean McLeod is a very inspirational person, and the values that he demonstrates and embodies daily are ones that we should all strive for,” said Melissa Cochran, a sophomore and Ervin Scholar who attended the announcement at the Student Union senate meeting. “He is one of those people that you feel truly lucky to know, and if anyone deserves this honor it is him,”

The Mcleod Endowed Scholarship fund has already raised $3 million through donations from the University community.

The program is a part of the greater University-wide initiative announced in September called “Open Doors to the Future.” The University hopes to raise $150 million in scholarships and fellowships in this effort.

Traditionally, the Senior Class Council is not affiliated with the senior class gift. Instead, the alumni and development office has spearheaded the effort, sometimes asking students to get involved and give gifts by college as opposed to one from the entire class.

Cutz said the old method of donating a class gift was a flawed effort. The giving rate among the senior class in recent years has been between 16-19 percent, which is significantly less than peer institutions. Yale University traditionally has a participation rate of 88 percent, and the University of Chicago has one of 77 percent. None of Wash. U.’s peers have a lower rate than the upper 70th percentile.

Cutz is hoping to have 70 percent of the senior class participate, which would be a significant increase from last year’s 17 percent. Though he hopes that each student gives $20.10, he said it is not the amount that counts.

“What matters isn’t how much it is, it’s the participation rate,” Cutz said. “I think it would be warming to [McLeod] to see 70 or 80 percent of the class donating in his honor.”

Students can either donate online, as collections have run in the past, or obtain a slip from the Senior Class Council and include the donation in their senior class packet.

This is the first year where there will be one gift, as opposed to a seperate gift from the students in each individual school.

With the consolidation of the class gift, there will be one giant party for seniors who donate, instead of multiple smaller ones.

Anyone can contribute to the McLeod Scholars Program at http://gifts.wustl.edu.