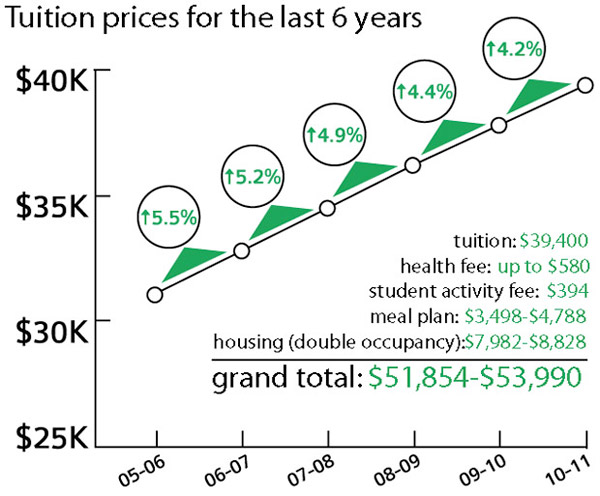 The state of the economy was cited as a major reason for the increase.

“Like all of us, Washington University has felt the impact of these forces,” the letter read.

The announcement came in letters that were mailed to parents on Wednesday and were put in students’ mailboxes on Thursday.

According to the letter, there has been improvement in the endowment since the announcement that it had declined by a quarter of its value. The endowment is still 15 percent below its value a year and a half ago, however.

Charges for housing and meal plans will increase as well. Depending on the housing style and meal plan students choose, the total amount students will pay next year varies. Students living on campus in a double-occupancy room will pay between $7,982 and $8,828 depending on housing style, a 4.3 percent increase over this year’s rates. The price of meal plans increased by 3 percent.

Fees in graduate programs saw the same 4.2 percent increase in all schools except the Sam Fox School of Design & Visual Arts, where the increase was 4 percent, and the School of Medicine, whose prices will be set in March.

“Despite University efforts to contain costs, some expenses cannot be restrained if the institution is to offer ever-improving programs,” the letter read. “Examples include updating classrooms and laboratories, hiring the best faculty and facing rising health-care costs for employees.”

The University faces a projected annual $30 million shortfall, and is taking steps to reduce costs to close the gap as well. Administrative salaries were also frozen, and Chancellor Mark Wrighton volunteered a 10 percent reduction to his salary.

Director of Student Financial Services Bill Witbrodt said that the increased tuition is factored into how financial aid applications are considered.

The capital initiative, Opening Doors to the Future, was announced during the fall semester and seeks to raise $150 million for scholarships.

Witbrodt said that even students who have not received financial aid in previous years can apply. Changes in family circumstance are also taken into account.

“Anyone who hasn’t had access before to financial aid is invited to apply for financial aid,” Witbrodt said. “We know that in the current economy, our students’ families are having difficulty. We know that we’re probably going to have to increase financial aid to allow them to continue their education at Washington University. We hope that any students who are concerned about finances and their ability to stay at the University will contact us.”

Witbrodt said that despite the tuition increase, the University has the resources to meet financial need.

According to the letter, financial aid to undergraduates has increased 22 percent over the past two years. Sixty percent of students receive aid.

David Messenger contributed to this story.