Religion and politics center to open 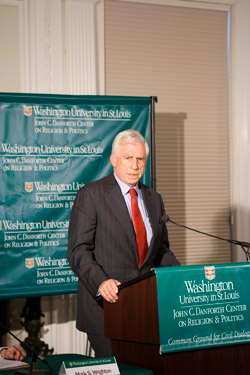 The John. C. Danforth Center on Religion and Politics opens in January. For the center to be successful, Danforth, former Republican senator from Missouri, emphasized that all opinions on the role of religion in politics must be analyzed and discussed in an academic manner. (Student Life | Joshua Goldman)

The new John C. Danforth Center on Religion and Politics opens this month, after Washington University received a $30 million endowment from former Sen. John Danforth and the Danforth Foundation.

The endowment is believed to be the largest of its kind given to any university. The center will focus on the intersection between religion and politics in the United States and offer students a variety of new opportunities in this area.

Multiple disciplines will be incorporated into the center, including American culture studies, history, politics, religious studies and law. It will provide the greater academic community with an electronic publications program and create a program for students in Washington, D.C.

“The center will serve as an ideologically neutral place that will foster rigorous, unbiased scholarship and encourage conversations between diverse and even conflicting points of view,” Chancellor Mark Wrighton said.

The center will also examine what Danforth said was the paradox of a religiously neutral democracy that is served by religious people.

“It’s been clear from the very outset that while there’s to be separation of church and state, religious people and people who see things in a religious light are involved in public affairs and are involved in what goes on in our country,” Danforth said.

Danforth, a Republican, represented Missouri in the U.S. senate for 18 years and is an ordained Episcopal priest.

Unlike most institutions of its kind, this center will explore religion’s role in politics from a non-sectarian perspective.

“Historically, the responsibility for this kind of dialogue has most often been left to universities with religious connections,” Danforth said. “But great non-sectarian institutions like Washington University combine rigorous academic standards with traditions of civil conversation, and that’s why this is a perfect place for such a center.”

With religion being such a sensitive topic to many Americans, examining it in an academic and unbiased manner is important, Danforth said.

“I think the more light that is shed on the subject, the healthier we are,” he said.

The architect of the program is Wayne Fields, professor of English. He will serve as the founding director of the center until a replacement is found. He is also teaching a course on religion and politics this semester.

With the opening of the center, the school administration hopes to introduce a religion and politics minor to the College of Arts & Sciences. Included in this program are opportunities for students to spend a semester or full year in Washington working in a related internship with the center or a national religious organization. These opportunities should be made available by fall 2010.

The center will also host a conference every four years during the presidential election.

A part of the Center’s purpose is to show the University’s renewed interest in building strong ties with Washington. The program will run in partnership with the Brookings Institution and aims at building a connection between participants and the city.

The $30 million contribution from the Danforth Foundation will go toward providing five new faculty members, each of whom will be associated with a different department of the College of Arts & Sciences.

The endowment will also go toward providing an operating budget of $1.3 million annually.