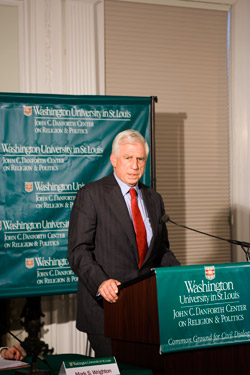 The John. C. Danforth Center on Religion and Politics opens in January. For the center to be successful, Danforth emphasized that all opinions on the role of religion in politics must be analyzed and discussed in an academic manner. (Joshua Goldman | Student Life)

The University announced this morning that it received a $30 million endowment gift from the Danforth Foundation to establish a center for religion and politics on campus.

Set to open in January 2010, the center will examine the role of religion in American political discourse.

The center will hold public conferences and lectures to address local, state and national issues related to religion and politics and will also offer  an educational program in religion and politics. An interdisciplinary undergraduate minor in religion and public life will also be established.
“Knowing that religious values and beliefs can either encourage or undermine civility, the center and its educational programs and scholarly research can provide a bridge between religious and political communities and will inform new kinds of academic explorations focusing on the relationships between the two,” Chancellor Mark Wrighton said in a press release.

The center will be called, The John C. Danforth Center on Religion & Politics, and is named after John Danforth, a retired Republican senator who represented Missouri in the U.S. Senate for 18 years.

Based on both his political and religious background, Danforth’s involvement in the establishment of the center comes as no surprise. The former senator is an ordained Episcopalian priest and in recent years has drawn headlines about his vocal opposition to what he deems as the Republican Party’s transformation into a group of conservative Christians. In 2006 he authored a book titled, Faith and Politics: How the “Moral Values” Debate Divides America and How to Move Forward Together.

“Historically, the responsibility for this kind of dialogue has most often been left to universities with religious connections,” Danforth said in the press release. “But great non-sectarian institutions like Washington University combine rigorous academic standards with traditions of civil conversation, and that’s why this is the perfect place for such a center.”
Wayne Fields, the Lynne Cooper Harvey Distinguished Chair in English at the University, was named as the center’s founding director. Fields has been at the University since 1968 and is the founding director of the University’s American Culture Studies Program.

Wrighton, Fields and Danforth were all present to announce the center’s creation at a press conference in Washington D.C. at the National Press Club.

This announcement comes just months after Wrighton announced a 30 percent endowment decline from its peak value two years ago.

The three leaders will meet at 3 p.m on campus for another press conference. Check back for more information.