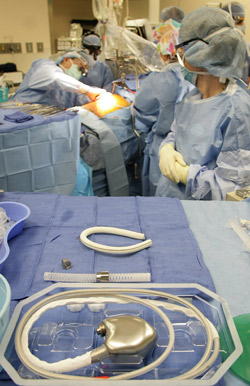 The Washington University cardiac surgical team at Barnes-Jewish Hospital successfully implanted an FDA-approved artificial heart in a 47-year-old patient on Oct. 27. The seven- hour-long surgery was led by Nader Moazami and assisted by I-Wen Wang.

“The operation went really well,” said Moazami, surgical director of heart transplant at Barnes-Jewish Hospital and associate professor of surgery at the Washington University School of Medicine. “The patient was recuperating well in the immediate days following the surgery.”

Despite the success of this heart implantation surgery, the 47-year-old patient died a week afterward due to an unexpected stroke.

“His death was definitely a shock for us,” Moazami said. “He was recovering well immediately following the surgery. We were enlisting him on an intensive rehabilitation program lasting from three to six months.”

It is unclear, at this point if the patient’s death was directly related to the artificial heart.

Barnes-Jewish Hospital is only one of 12 hospitals throughout the United States to be certified to implant the CardioWest temporary Total Artificial Heart (TAH-t). The CardioWest TAH-t is an improvement over the Jarvik-7 Artificial Heart. It was named the number one advance in cardiovascular medicine by the American Heart Association in 2004. Barnes-Jewish Hospital was certified by SynCardia, the manufacturer of the CardioWest, approximately three years ago.

This patient is the second recipient of the CardioWest artificial heart at Barnes-Jewish Hospital.

The previous artificial heart implantation occurred in December 2007. Unfortunately, that patient similarly passed away due to complications roughly seven days after the surgery.

“We are very selective in who gets the [CardioWest],” Moazami said. “The device is usually implanted in patients with severe dysfunction in both sides of the heart.”

According to Moazami, the CardioWest is a means of stabilizing the patient and making him a better candidate for a real heart transplant. It is the only artificial heart suitable and appropriate for end-stage biventricular heart failures in patients. The CardioWest is able to pump up to 9.5 liters of blood per minute safely through the body.

“One of the disadvantages of the CardioWest is that a bigger operation is required compared to other devices,” Moazami said. “In addition, we cannot discharge patients home.”

“There are some disadvantages with this device, perhaps reflecting just the limitations of the speed with which we can translate state-of-art technologies to clinical practice,” said Wang, assistant professor of surgery at the School of Medicine. “The size of the device (the implanted internal pumps) limits the size of the patients in which we can implant the TAH. In addition, the controller for the TAH is a large console and is cumbersome.”

Besides CardioWest TAH-t, the cardiac surgery department at Barnes-Jewish Hospital is also qualified to permanently implant left ventricular assist devices (LVADs) in heart failure patients. In fact, it is the only group in the St. Louis area to be certified by the federal Medicare program for LVADs.

The cardiothoracic surgery department at Barnes-Jewish Hospital is among the highest ranked in the nation. The U.S. News & World Report ranked it as the 12th best heart and heart surgery hospital in the country in 2009. It is one of the few elite departments around the country that provides the full spectrum of cardiac surgical services.

Since 1985, the Washington University surgeons at Barnes-Jewish Hospital have performed more than 500 heart transplants. More than 20 years later, almost half of these patients are still alive.