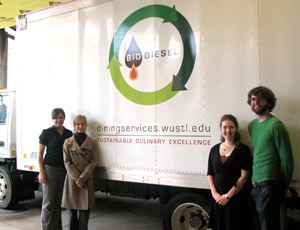 Bon Appétit will soon begin pumping the waste oil used from cooking into campus vehicles for use as fuel.

Bon Appétit has entered into a partnership with Kelley Green Biofuel, a local company founded by Kristopher Kelley, a 2008 Washington University alum, in order to convert the vegetable oil waste into biodiesel fuel.

Kelley first developed the idea for his company in an entrepreneurship class at the Olin Business School. He eventually founded the company in the summer of 2008, using his own savings to fund the project. He has done the majority of the work himself, including building a vacuum collection system to pick up the waste cooking oil and building a refinery to turn the cooking oil into biodiesel.

Kelley said that while waste cooking oil is hard to deal with, it makes more sense to use recycled oil instead of “virgin oil,” or oil that comes directly from plant or grain sources.

“There is much more virgin oil available than recycled. However, the commodity market is volatile and the price of soybeans can go up, and the price of fuel can go down. That makes the economics not feasible,” Kelley said. “Recycled oil is different. It is in limited supply, but it makes so much sense for biodiesel. I think all that can be utilized for fuel must be.”

The waste vegetable oil must first be cleaned of water and food sediments. Then lye (sodium hydroxide) and methanol are mixed with the oil to remove the glycerin. Finally, the oil is safe to use in any diesel engine. Kelley Green Biofuel delivers the final product to a 300-gallon tank located on North Campus.

Although Kelley Green Biofuel is currently a small company, Kelley hopes to eventually expand into other cities.

“I plan on having several small-scale production facilities, less than 500,000 gallons per year, in several different cities,” he said. “I want to collect waste oil locally, process it into biodiesel locally and then sell it locally.”