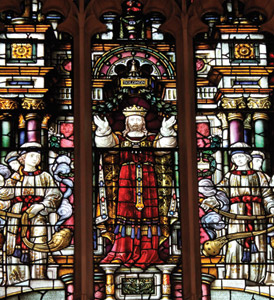 Graham Chapel is filled with the influence of the Freemasons. The pillars, King Solomon in the eastern window, and the hexagrams in the windows are all symbols of Freemasonry. (Matt Lee | Student Life)

With lore about the Freemasons sensationalized in novelist Dan Brown’s latest book, “The Lost Symbol,” Washington University students may be surprised to learn that the University’s connections with Freemasonry run deep.

Originating from medieval traditions, freemasonry is a fraternal and charitable organization with secret rituals whose members share moral, intellectual and spiritual values.

Several prominent early members of the University community had ties to Tuscan Lodge #360, a Freemason society located in the Central West End. Some former Freemasons include Robert Brookings, William Bixby and William McMillan, all of whom have buildings named after them on campus. Architect James Jamieson, who designed many of the University’s buildings, including Brookings Hall, was also a Freemason.

Freemasons have also had a significant influence on University architecture. Perhaps the most notable example of this is in Graham Chapel.
In the center of Graham Chapel’s eastern window is an image of King Solomon, a figure central to Freemason lore.

“King Solomon’s temple and building and its description is a part of the story that goes with the ritual that we have,” Barthold said.

Two pillars, another symbol of Freemasonry, are on each side of Solomon and represent Boaz, great-grandfather of David and symbol of strength, and Jachin, the high priest at the temple’s dedication and symbol of establishment in the Lord.

The eastern, northern and southern windows in Graham Chapel also bear a subtle reference to the six-pointed star, or hexagram. Although perhaps most recognizable as the Star of David, the hexagram was believed to have been found within Solomon’s temple, as well as inside and outside many current Masonic lodges.

The two interlaced triangles suggested by the windows symbolize the opposition of two equal forces—light and darkness, good and evil, wisdom and ignorance, and other principles. The hexagram also came to represent the four Grecian elements—fire, water, air and earth—or, when taken together, totality.

Barthold said that although Freemasons are often represented as a secret society, their actions are often very public.

“Are we secret? Well, if you look in the telephone book, you’ll see Tuscan Lodge.  It’s there,” Barthold said.  “We’re not a secret society.  We’re a fraternity with some secrets.”

“We don’t want to argue with people who have their minds made up,” Barthold said.  But he added, “We’re being forced into changing that a little bit now.”
As for Dan Brown’s books, Barthold said that Brown could have taken any organization and written about it.

“I think they’re rather entertaining,” he said.  “But I don’t agree with all of it.”

Sophomore Rachel Folkerts said she was surprised to learn of the University’s ties with Masonry.

“That’s really bizarre that we have a Masonic influence,” Folkerts said.

Folkerts has read all of Dan Brown’s novels, except the latest one. She said her opinions of Freemasonry have been heavily influenced by what she has learned through pop culture.

“The fact I know [about Freemasonry] from Dan Brown books shows how they’re viewed in culture,” Folkerts said.  “I know it because of these fictional, pretty ridiculous stories, so that’s the context that I think of them in.”