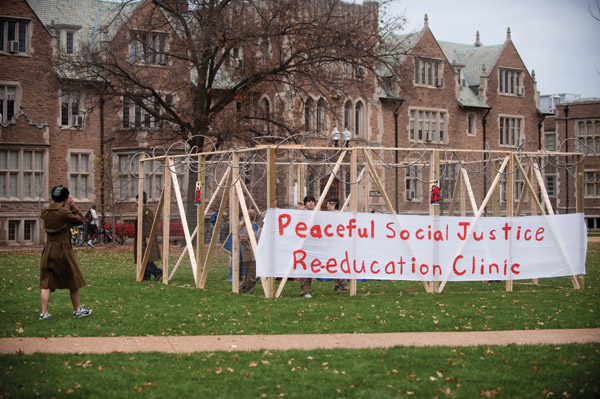 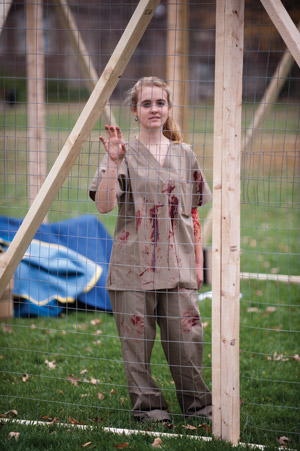 Sophomore Emily Piontek stands inside of a gulag created by Wash. U. Young Americans For Liberty. (Matt Mitgang | Student Life)

Members of the Washington University chapter of Young Americans for Liberty erected a mock Soviet prison camp, or gulag, in front of the Women’s Building Monday morning, but were later told by a representative from Event Services to disassemble the display.

“We feel that this was more of the administration and faculty getting upset about the display than it was about safety issues,” said junior Dirk Doebler, president of the University chapter of YAL.

YAL members built the mock gulag to commemorate the 20th anniversary of the fall of the Berlin Wall and to condemn Soviet communism and socialist regimes. The display was a four-sided wooden structure with fake barbed wire on top and Soviet Communist propaganda posters on its sides. A large sign on the structure read “Peaceful Justice Social Reeducation Clinic.”

YAL members at the display also handed out fliers to students that detailed the history of gulags and included a passage on resisting tyranny.

After the students had finished building the display, a representative from Event Services told them they had to disassemble it.

The University statement said the display was shut down because it had not been approved and was unsafe, not because it was controversial.

“The University has a long history of accommodating disparate and often unpopular points of view and continues to support the rights of its students and faculty to express their differences and opinions, as long as the venue has been reserved, described accurately and deemed safe and free of physical risk to themselves and others,” the statement said.

Sophomore Emily Piontek, a member of the YAL who posed as a prisoner in the mock gulag, said the main purpose of the display was to raise awareness about problems with Soviet communism that are connected with the Berlin Wall. Piontek said another reason for the display was to raise concerns held by some members of the YAL that U.S. government health care reform is bringing America closer to socialism.

“I think it was mostly about the Berlin Wall, but I think certain policies that are going on today and certain things in the government, and mostly the health care plan, were reasons that we wanted to host the event,” Piontek said.

But James Wertsch, the Marshall S. Snow Professor and director of International & Area Studies, said that the emergence of communism and socialism are not big issues today and that new forms of nationalism are currently greater issues for America.

However, he said that it was appropriate for YAL to commemorate the gulag since huge numbers of people suffered in these prison camps.

“If I would have stopped and talked to them and seen that it was a gulag exhibit I would have been interested, but for the reason of commemorating it, not because I’m afraid that communism is coming back,” Wertsch said.

John Burns, an area resident who is not a student but who is involved with the Washington University YAL and participated in the display, said he felt the University censored students in a manner similar to Soviet communists.

“I guess the students at Washington University were in a gulag all along, and the administration proved it through their stifling of free speech,” Burns said.

With additional reporting by John Scott