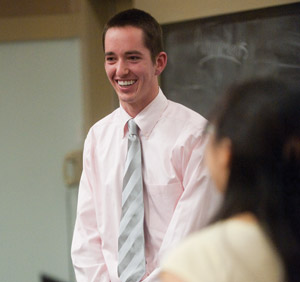 Nate Ferguson assumed the role of vice president of administration for Student Union on Wednesday following confirmation by Senate and Treasury. He has stepped down from his prior role as vice president of programming. (Matt Mitgang | Student Life)

Ferguson promised to rework the internal processes in SU by increasing communication within the body and communicating with student governments in peer universities. Ferguson’s appointment comes after former Vice President of Administration Trevor Mattea’s resignation in October.

The position is focused on internal processes in SU. The vice president of administration helps to maintain the office and foster communication among the various bodies involved with SU.

“I really did enjoy my role as vice president of programming, but now I see my role as administration because that’s more where I’m needed right now,” Ferguson said.

Ferguson was selected by other executives from a short list of two candidates, both of whom were involved with SU.

Ferguson sees himself as qualified for the position because of his previous experience with SU. One project he has already started is working with senators and other SU members to gather feedback on SU as a whole. This project aims at improving SU retention. Ferguson also wants to have an internal newsletter and be in contact with other student governments to gather ideas for projects and ways to implement them.

Although there will be a new selection process for a vice president of programming, Ferguson said he thinks that the transition will be smooth because of his continued presence in the body.

“I’ll be there to make sure that they are transitioned well, [and that] any questions they have are answered,” Ferguson said.

With this new appointment, only two of the original five executives are still holding their elected positions.

Ferguson said he does not think his shift to a different position will affect the administration’s accountability.

“I see it more as I’m doing what I feel is best for the student body and SU as a whole,” Ferguson said. “I don’t see it as losing accountability because we’ve gone through this with other people, unfortunately.”

Senior Jeff Nelson, SU president, said he does not see this as a problem either.

“[We] took into account the fact that we all ran as a team…Nate specifically ran as programming but it was within the parameters of that vision…he’s still working on that same platform, just in a new capacity,” Nelson said. “People vote for ideas, not people performing mundane tasks.”

The position of vice president of programming was the only one that was contested in the last election. Ferguson was asked to fill that position on the Montana slate because of his two-year experience as president of his class council.

The duties of the vice president of programming are primarily running the SU pre-Orientation program and planning SUp All Night, an activity at the beginning of the school year.

The new vice president of programming, unlike that of administration, may come from outside SU.